Mr Somchai said he accepted the verdict by the Constitutional Court.

'My duty is over. I am now an ordinary citizen,' the 61-year-old added.

'Our members are determined to move on and we will form a government again out of the majority that we believe we still have,' said Mr Jakrapob, a close associate of ousted Prime Minister Thaksin Shinawatra.

The court also barred the party's top leaders, including Mr Somchai, from politics for five years, raising the risk of clashes between his supporters and thousands of anti-government protestors blockading the capital's two airports. Two other junior parties in the government coalition were also ordered to disband.

However, all six parties in the ruling coalition have vowed to stick together and form a new government. MPs who escaped a political ban would move to new 'shell' parties, a spokesman said.

About 500 pro-government demonstrators picketed the hearing even after fellow demonstrators had prompted judges to evacuate the downtown court building and move to premises on the outskirts of Bangkok.

They faced off against riot police, wearing red scarves saying 'Love Thaksin,' a reference to premier Thaksin Shinawatra, who was ousted in a 2006 coup.

Earlier a grenade attack killed a 29-year-old protestor from the rival, anti-government People's Alliance for Democracy who was enforcing the movement's blockade of Bangkok's domestic Don Mueang airport.

It came just hours after the royalist PAD ended a three-month sit-in at the prime minister's offices in Bangkok following a series of similar attacks and redeployed supporters to Don Mueang and the Suvarnabhumi international airport.

Bangkok's international airport will remain closed until 15 December due to a blockade by anti-government protestors, the airport manager said.

'The rally has caused massive damage to the country. We will try to open the airport as soon as possible,' Serirat Prasutanond, acting head of Airports of Thailand said in a statement.

The closure refers to passenger flights. One cargo flight left on Tuesday and others were scheduled to follow, the first departures in a week. 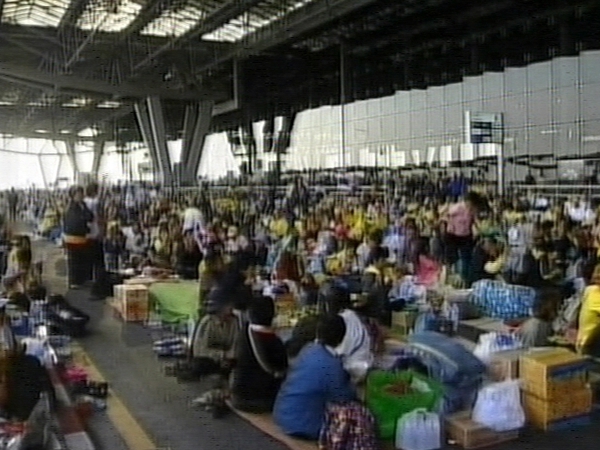