Brian Cowen has been confirmed as Ireland's 12th Taoiseach and revealed his first Cabinet.

Brian Lenihan is the new Minister for Finance, while Batt O'Keefe becomes Minister for Education, taking Mary Hanafin's portfolio. She moves to Social and Family Affairs.

Pat Carey becomes Chief Whip, a move which sees Tom Kitt return to the back benches.

The new Minister for Justice is Dermot Ahern, while his position in Foreign Affairs is taken by Mícheál Martin.

Martin Cullen is Minister for Arts Sport and Tourism and Brendan Smith takes Mary Coughlan's position in Agriculture and Food.

Mary Harney retains her position as Minister for Health as does Willie O'Dea, who stays with Defence. John Gormley and Eamon Ryan see no change, remaining in Environment, and Communications Energy and Natural Resources, respectively.

At the Arbour Hill 1916 commemoration this morning, Mr Cowen told reporters he would be making calls to his colleagues this afternoon telling them of his intentions. However there were still a few surprises when the announcement was made.

After an hour-long debate in Dáil Éireann this afternoon, Mr Cowen won a nomination vote for Taoiseach by 88 votes to 76.

He then travelled to Áras an Uachtaráin to sign the Warrant of Appointment and receive his Seal of Office from President McAleese.

Mr Cowen addressed the Dáil saying he was deeply honoured by his nomination to the role of Taoiseach and would accept it with a genuine sense of humility.

Opening his acceptance speech in Irish, Mr Cowen made a point of stressing the importance of the language which he described as a jewel which could not be allowed to die.

He said he was not expecting a honeymoon in office and anticipated fair criticism from the opposition and the media.

Mr Cowen said his most 'urgent' task in the coming weeks is to ratify the Lisbon Treaty and let the Irish public know that it is in their interests.

He also praised Bertie Ahern, calling him an inspirational example and wishing him happiness in the future.

Prior to Mr Cowen's address, members of Government and Opposition wished Mr Cowen well in his new role.

In congratulating the new Taoiseach, Fine Gael Leader Enda Kenny said Mr Cowen has assumed position as captain of the team of Ireland he urged him to use his position wisely and not to shirk his responsibility.

He said said any other plaudits or credits that Mr Cowen looked for would have to be earned.

Labour Party Leader Eamon Gilmore also congratulated Mr Cowen, but added that he was coming to office at a changed time and that many of those changes were his own making.

Bertie Ahern tendered his resignation this afternoon and nominated Mr Cowen for the position of Taoiseach.

Mr Ahern said Mr Cowen was 'a uniquely well qualified candidate' to succeed him as Taoiseach, saying he had shown ability and leadership in a number of demanding ministerial positions.

Describing him as 'tough but fair minded, gregarious but thoughtful,' Mr Gormley said the task faced by the new Taoiseach was an enormous one.

Speaking in support of Mr Cowen's nomination, Minister for Health Mary Harney said she very much looks forward to his election.

Mr Harney said although he was the youngest of the three candidates for Taoiseach, he was someone who has enormous political insights and great vision for the country he believes in.

President Mary McAleese, members of the Cabinet and leaders of the Opposition were also in attendance.

In accepting the nomination, he told a packed National Executive meeting that becoming leader and Uachtarán of Fianna Fáil was the greatest honour of his political career to date. 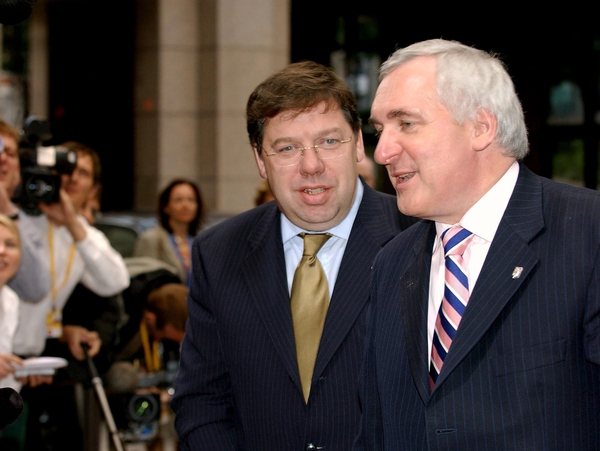