The Irish Olympic Council has said the Irish team and its athletes will be taking part in the Beijing Olympic games regardless of any political or diplomatic boycott that could be staged.

Under the Olympic Charter sport and politics always remain separate. The Irish Olympic Council says for that reason athletes and coaches will participate in the Beijing Games and the opening ceremony regardless of any boycott.

If Ireland did decide to boycott the games, it would not affect the participation of athletes but only impact state representatives visiting Beijing. Normally the Sports Minister attends the Olympics.

Today in the Seanad Independent Senator Joe O'Toole described the Olympic flame as a symbol of torture, oppression and suppression. He called on the Government not to attend the Olympics opening ceremony.

Mr O'Toole said Minister Dermot Ahern should indicate that neither he nor anyone representing the Irish Government will stand with Chinese leaders or participate in the opening ceremony of the Beijing Olympics.

The Minister for Foreign Affairs Dermot Ahern said today that the issue of Ireland boycotting the Olympics games has not been discussed but will be reviewed in the future.

The Minister described Government reaction to protests about Chinese policy as 'difficult'.

He said China has come a long way, and Ireland will have to deal with China long after the Olympics are over.

He said issues surrounding Tibet, Darfur and Burma are constantly part of dialogue and he said the EU has been constantly strong on these issues.

Mr Ahern said meetings with the Chinese ambassador on the Tibet issue have taken place in the past.

Future of Olympic torch relay to be discussed

Meanwhile, the President of the International Olympic Committee says the Games' executive board will discuss the Beijing Games torch relay when it meets later this week.

Jacques Rogge was speaking after protests disrupted the European legs of the relay, but he would not speculate on what options might be discussed.

Other Olympic sources said earlier the current relay would continue as planned, but the board was likely to discuss the role of the relay for future Olympics at this week's meeting in Beijing.

Chinese sources are adamant that protests will not affect the relay. A spokesman for the organisers, Sun Weide, said 'No force can stop the torch relay of the Beijing Games.'

The Olympic flame travelled overnight from France to the US, where the torch relay is to be run in San Francisco tomorrow.

Seven people have already been arrested in the city, where further protests are expected to greet the flame.

The Paris leg of the relay had to be completed hastily by bus yesterday due to security concerns after repeated disruption by pro-Tibet demonstrators.

At least 23 people were briefly detained by French police.

The Beijing Olympic Committee is trying to stage the most ambitious Olympic torch relay of all time, visiting 19 countries outside China during a 137,000km journey.

In China, the torch is scheduled to travel to each province, and the journey includes controversial legs up Mount Everest and through Tibet. 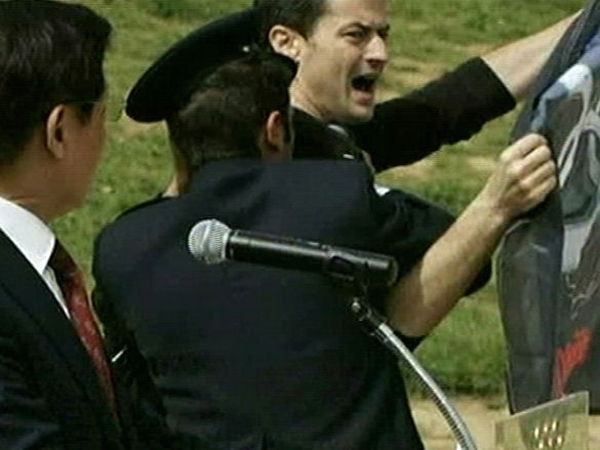