The Vatican has promised a speedy investigation and disciplinary action if necessary after a senior official who was filmed by a hidden camera was show on Italian television making homosexual advances.

Monsignor Tommaso Stenico, a top official at the Congregation for the Clergy, which oversees priests around the world, was heard telling a young man he was 'hot' and that homosexual sex was not sinful.

However, Mgr Stenico, who did not know he was being filmed and whose face and voice were distorted in the broadcast, says that he was only pretending to be gay to learn about people trying to 'harm' the Church with homosexual behaviour.

Cardinal Julian Herranz, president of the Disciplinary Commission of the Roman Curia, said the Vatican would act quickly after suspending Mgr Stenico from duty, but declined to say what sanctions could be brought.

He said sexual misconduct is often dealt with through Canon Law 1339, which has been applied against priests found guilty of sexual abuse against minors.

The Catholic Church does not consider homosexual tendencies sinful in themselves but condemns homosexual acts and teaches that priests should adhere to their vow of celibacy.

Mgr Stenico told La Repubblica over the weekend that he had never broken his vow of celibacy. He describes himself as a psychoanalyst who was only trying to learn about gay behaviour by impersonating a homosexual.

Four priests appeared in the television programme, which was broadcast at the beginning of the month on national Italian channel La7. All had their faces hidden from the camera and their voices electronically disguised.

Mgr Stenico made the mistake of giving his interview in his Vatican office, which was identified by other staff, La Repubblica reported.

In the interview, Mgr Stenico said that he did not regard himself as a sinner, but had to be discreet in order not to attract the attention of his superiors.

Vatican spokesman Frederico Lombardi said on Saturday that Stenico had been suspended because of behaviour incompatible with priestly duty.

At the start of Pope Benedict's pontificate in 2005, the Vatican imposed restrictions on homosexuals becoming priests.

The document says practising homosexuals should be barred from entering the priesthood along with men with 'deep-seated' homosexual tendencies and those who support gay culture. 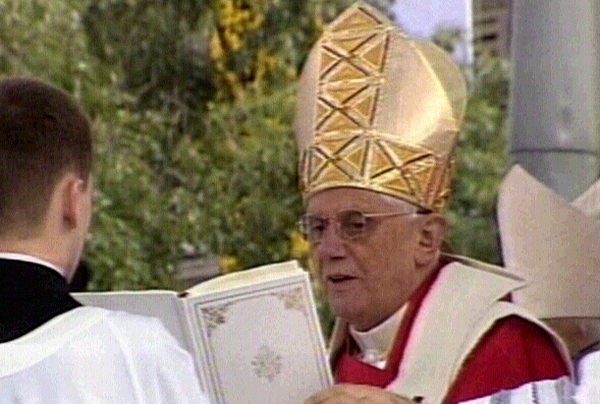