Pope Benedict XVI urged Spain on Saturday to defend the traditional family in the country where the Church and government have clashed head-on over the legalisation of gay marriage.

The Pope said there were certain things to which the Church must just say 'No', and that the family based on heterosexual marriage was 'a unique institution in God's plan'.

The 79-year-old Pope received a tumultuous welcome in the coastal city of Valencia, where he will spend little more than 24 hours at a global gathering of Roman Catholic families.

But Spanish Prime Minister Jose Luis Rodriguez Zapatero, whose government legalised gay marriage last year, was whistled while he visited the archbishop's residence for an audience with the Pope, which lasted just 15 minutes.

'There are certain things that Christian life says 'No' to,' the Pope told reporters on his plane from Rome to Spain.

'We want to make people understand that according to human nature, it is a man and a woman who are made for each other and made to give humanity a future,' he added.

The Pope also visited the metro station where an underground train derailment killed 42 people this week.

The papal convoy stopped at the Jesus metro station on its way into town from the airport.

The Pope, who was greeted by tens of thousands of cheering people on his way into the centre of this coastal city, left his popemobile briefly to pray and lay a wreath at the entrance to the underground.

Bowing his head in silence towards the pavement outside the site of Monday's crash, Benedict made the sign of the cross and comforted Valencia's mayor Rita Barbera. 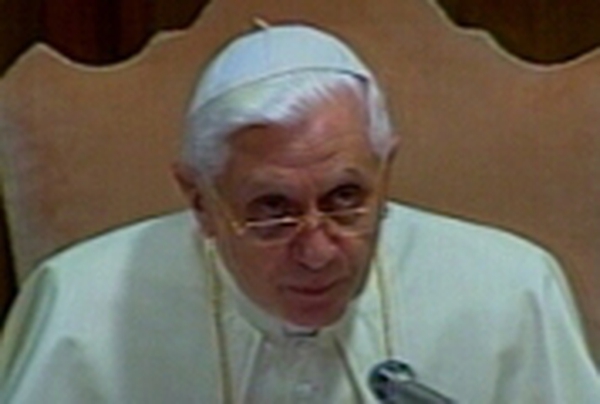