Five people have been arrested at a Shell to Sea protest at the entrance to the Corrib gas terminal site in Bellanaboy in Co Mayo.

One was arrested in relation to an assault on a member of the Garda Síochána who needed to be taken to hospital with a facial injury. Four others were arrested for public order offences.

A second garda was taken to hospital with a hand injury. A garda spokesman said the scene remains fractious.

More than 150 Shell to Sea protestors are staging a sit-down.

Earlier the demonstration developed into a confrontation with gardaí when at least 50 protestors climbed over the gates of the site. The protestors were pursued by gardaí.

A spokesperson for Shell to Sea, John Monaghan, said he was happy that protestors were there to conduct a non-violent protest, adding it was unfortunate there was an over-reaction by some members of the gardaí.

Willie Corduff, who was jailed for contempt over previous protests against the controversial gas project, said the Government was doing nothing to support the local community.

He said that he and his fellow supporters would continue with what he called the campaign of solidarity.

A spokesperson for Shell Ireland said that 300 of its workers had entered the site this morning without being blockaded.

The Shell to Sea campaign group is opposing a controversial gas terminal and pipeline. 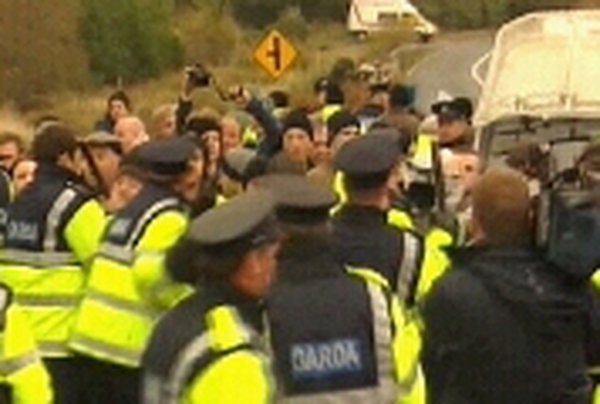