Shell to Sea protestors and gardaí were involved in a serious confrontation near the Corrib gas terminal site in north Mayo today, when protestors blocked a convoy of vehicles taking construction workers to the site.

More than 200 Shell to Sea campaigners, some of whom travelled from Dublin, Cork and Galway, attempted to block the convoy of vehicles taking construction workers to the site at Bellanaboy.

They said they were doing so to protest at what they saw as a sell-out of Ireland's natural resources and to halt the building of the gas terminal.

Garda Supt Joe Gannon said prior to the clashes he had asked the demonstrators to clear the road and they had refused.

Willie Corduff, one of the five Rossport men jailed for 94 days last year, was at the centre of the protest group. He said what was happening was appalling and would only lead to what he described as 'open war' and far more trouble from now on.

A number of people were injured in the running clashes but gardaí eventually cleared the road and the convoy entered the site.

The Shell to Sea group says its campaign will be intensified after today's action and it is determined to stop the terminal on health and safety grounds.

Shell Ireland, in a statement, said it was very regrettable that today's protest was not peaceful, but any talk of suspending work on the terminal was unrealistic.

The Taoiseach, Bertie Ahern, has said the Government's position is clear in relation to the Corrib gas situation - that the negotiating is over and 'that is it'.

Mr Ahern said that the rule of law has to be implemented and the work will go on. 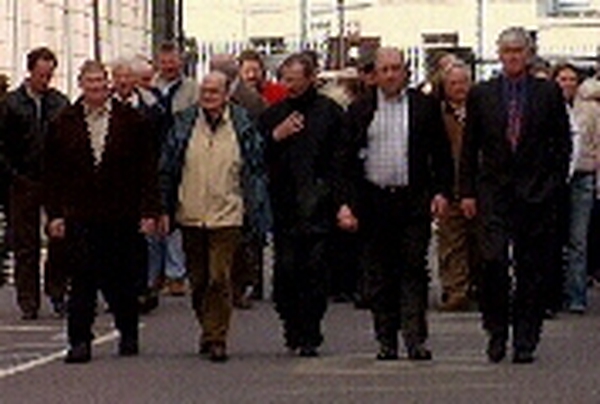