The Green Party has said that following a request from Fianna Fáil this afternoon, it has sent the party a document detailing what the Greens see as the outstanding issues between the two parties.

One of the Greens' negotiators, Donal Geoghegan, has said that the document outlines the difficulties that Green Party believes need to be overcome before it can agree a possible deal on the formation of a new government.

Fianna Fáil negotiator Seamus Brennan said that contact with the Green Party will be maintained tonight and tomorrow.

Mr Brennan said it was worth giving it more time to see if the gaps between the parties can be bridged.

He said these talks would not be held in a similar manner to last week's negotiations.

He said that if the Greens do not come on board, the Taoiseach would have to look at other options such as the PDs and the Independents.

Mr Brennan also said the Labour Party would be further down his list and that he does not have any doubt that Bertie Ahern will be elected Taoiseach on Thursday.

Green negotiator, Dan Boyle, said he has been put on standby and he will be getting an early train from Cork to Dublin tomorrow morning.

Mr Boyle said the Greens would, despite many difficulties, be able to organise a party conference this week that would approve any deal with Fianna Fáil.

He said that this would have to take place on Wednesday and if it is going to happen, the Greens would have to see substantial movement from Fianna Fáil tomorrow.

The former Green TD said his party would need to know that any Government they would join, would be a new one, and that was not the case on Friday.

He added that when Brian Cowen told the media on Friday that the PDs were in line to be part of any new Government, then he was essentially telling the Greens this as well.

However, Labour's Eamonn Gilmore said the he cannot see the circumstances in which Labour and Fianna Fáil would enter talks.

Mr Gilmore questioned whether a Government including the Greens, the PDs and Independents would be sustainable for a five year term.

Speaking on RTE's This Week programme earlier today, the deputy leader of the Green Party, John Gormley said that a deal was still possible but it must be one that could be sold to his party membership.

Meanwhile, Fianna Fáil leader Bertie Ahern has said the Green Party brought forward some good ideas during the discussions on the formation of a government.

Mr Ahern said the Greens' policies on transport, health and education were not incompatible with those of Fianna Fáil.

In his first comments since the negotiations between the parties collapsed on Friday, Mr Ahern wrote that further discussion would be required for the two parties to reach the point where the mix of policies would be politically sustainable, economically feasible and in the national interest.

He also said the negotiations had been constructive and sincere on both sides, and that he could see a lot of merit in their suggestion for an all-party approach on climate change targets. 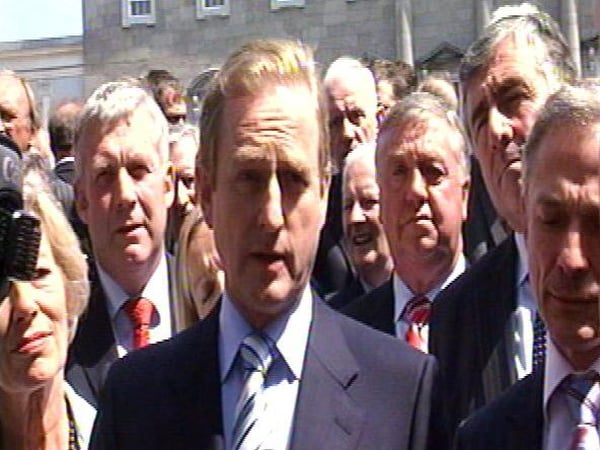