The Taoiseach has said he would have preferred to have called the election tomorrow, but had to make the announcement yesterday because of the President's travel plans.

He was speaking on the first full day of campaigning.

The Fine Gael leader Enda Kenny had said he would be bringing his contract with the people to every constituency in the country.

Even though the campaign is well under way there is still puzzlement over the Taoiseach's decision to make an early morning trip to Áras an Uachtaráin yesterday.

This afternoon Mr Ahern told journalists his preference would have been to call it on Tuesday of this week, but only two occasions in the past had the President not personally dissolved the Dáil, and Mrs McAleese had been due to leave for the US yesterday morning.

With all sides agreeing that this will be the most competitive election in years, parties are trying to get their message through to voters during the three and a half week countdown to 24 May.

In the campaign itself Fianna Fáil focused on the alternative coalition's economic plans which Finance Minister Brian Cowen said were 'a recipe for budget deficits and debt'.

Borrowing a phrase from a former Australian premier he said his party would be 'burning Fine Gael and Labour slowly on this particular barbie'.

Earlier Enda Kenny formally signed a giant version of his contract with the people, which he said he would take to each constituency.

The 14-element 'contract' includes election promises such as free health insurance for every child under 16, 2,300 more acute hospital beds and 2,000 more gardaí on the streets.

He also reiterated his pledge to stand down as Taoiseach if he failed to implement the pledges in the document.

The Labour Party also launched its election tour from Government Buildings this morning.

Labour leader Pat Rabbitte set off on what he is calling his 'Make a Change' tour.

Mr Rabbitte said health would be a campaign priority, and he criticised Mr Ahern for saying people were happy with the health service.

Pat Rabbitte also defended the Fine Gael and Labour joint economic plans which were prepared on the basis of Department of Finance and ESRI figures.

He said like any prudent Government in office, their implementation would take account of prevailing economic conditions.

The party began its tour with a focus on the Dublin constituencies. 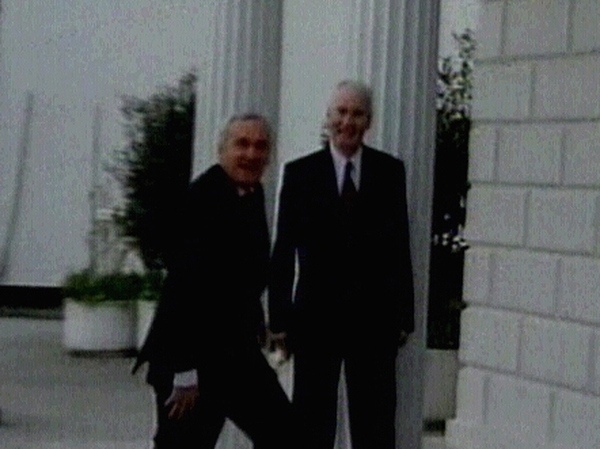 General Election on 24 May - Official