The gunman who killed 32 people and himself at Virginia Tech university yesterday has been named by police as 23-year-old Cho Seung-Hui.

A South Korean studying at the university, he lived on the campus and may have acted with one or more other people, though police are playing down that possibility.

It has been reported that police found a note in his dormitory room. ABC News said the letter explains his actions and says 'you caused me to do this'.

A .22-calibre handgun and a 9mm handgun were recovered at the scene. Police says one of the guns was used in both shootings.

The first incident happened at about 7.15am local time in West Ambler Johnston Hall, a residence building, and resulted in the deaths of a man and a woman.

Later in Norris Hall, one of several science and engineering school buildings on the campus, a gunman chained the main doors after entering and proceeded to shoot 30 staff and students dead before killing himself.

15 people were treated for injuries, some after jumping out of windows to escape.

Israeli sources say one of the dead was Liviu Librescu, an Israeli citizen and a professor of engineering at the university.

An Indian engineer, GV Loganathan, a 51-year-old professor of civil and environmental engineering, was also killed.

A vigil for the victims was held at the university last night.

President George W Bush was expected to attend a memorial service today at the university.

The campus remains closed and classes have been cancelled.

Four Irish students are attending the Virginia Tech university. They were unharmed in the attack.

The four are three undergraduate UCD engineering exchange students who are studying for a year at Virginia Tech and a graduate of civil engineering.

Nicola Greene, from Ballinacoola near Gorey in Co Wexford, was in a college building close to where the first gun attack took place.

She said she received an email to stay indoors as she was getting ready to leave for a class.

Among worldwide expressions of horror and sympathy, questions are again being raised over the US gun culture.

Australian Prime Minister John Howard recalled how a 1996 rampage in Tasmania by a lone gunman who killed 35 people had forced his government to rethink the whole issue of gun control.

'We took action to limit the availability of guns and we showed a national resolve that the gun culture that is such a negative in the United States would never become a negative in our country,' he said. 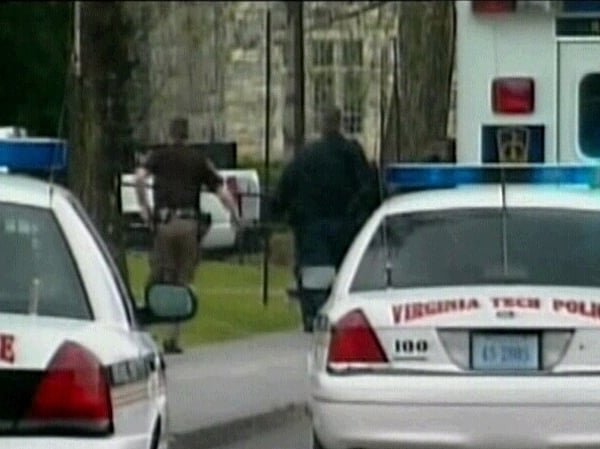