Afghan hunger strikers in St Patrick's Cathedral say they are now back on a hunger and thirst strike in pursuit of political asylum.

Justice Minister Michael McDowell has repeated that the 41 men must go through the refugee system.

Eight underage minors were made wards of court today but gardaí who have sealed off the area have not attempted to remove any of the protesters.

Several of the hunger strikers at St Patrick's Cathedral have threatened to jump from the organ loft in the building.

A statement from the Church of Ireland this evening confirmed that they are now pursuing legal options to bring the stand-off to a conclusion.

Earlier, one of the hunger strikers was taken away from the cathedral. He was taken out on a stretcher to an ambulance which had arrived there at about 4pm.

Just before 3pm, more garda vans had arrived at the main entrance to the building, and 20 additional gardaí went inside.

Fifteen officers entered the cathedral shortly after 9am this morning, while at least 30 other officers were stationed in groups around the building.

One of the Afghan youths on hunger strike claimed the gardaí had given a 7pm deadline for the protest to end.

The 17-year-old claimed they had been told if they did not leave by then they would be arrested and put into prison.

The President of the High Court refused an request that the gardaí take the minors into custody when he made seven of them wards of court at the request of the HSE this morning.

A Church of Ireland spokesperson said the request had been made in the light of threats made by the men to take their own lives.

The spokesperson said that threats of self-harm were not acceptable.

The spokesperson refused to confirm whether or not they would be requesting gardaí to remove the men.

Earlier, the hunger strikers were reported to have threatened to kill themselves if any attempt is made to remove them.

A spokesperson for Residents Against Racism, Henry Dent, criticised the garda operation and said there was an unnecessary number of gardaí in the area.

The group had earlier claimed some of the men attempted to commit suicide last night. 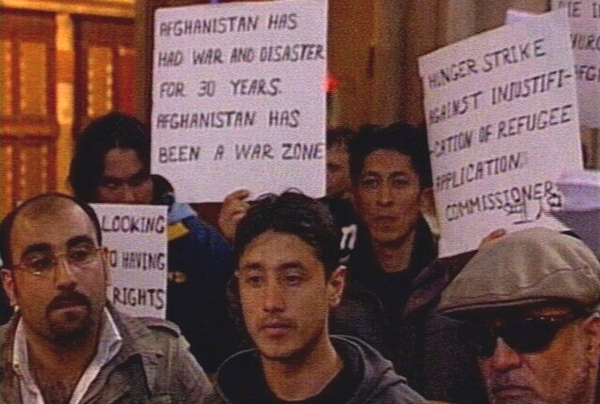