There has been sporadic violence in Belfast but nothing on the scale of the weekend rioting.

Crates of petrol bombs and paint bombs were seized during police searches at Ligoniel in North Belfast.

Police officers said they prevented a bus from being hijacked on the nearby Crumlin Road.

Crowds threw petrol bombs at New Barnsley Police Station as the base in West Belfast came under attack for the second night running.

Two cars were set on fire on the Crumlin Road in the north of the city, while in south Belfast stone throwing was reported on the Westlink motorway section.

Earlier the US envoy, Mitchell Reiss, called on the Unionist leadership to reassert itself to help calm the situation on the streets in Belfast.

Speaking after talks with the Taoiseach, Bertie Ahern in Dublin, Mr Reiss said everyone was a little disheartened by the disorder and he said it was not clear that the unrest was at an end.

On the subject of IRA decommissioning, he said the quality of arms disposal was more important than the timing.

In a separate development, 18 people arrested in connection with the weekend rioting have appeared at the city's Magistrates Court on a variety of charges.

Most of the fourteen men and four juveniles were remanded in custody on charges of riotous assembly, riotous behaviour, assaults on police, resisting arrest, criminal damage and possessing offensive weapons, including golf balls.

Separately, the Minister for Foreign Affairs, Dermot Ahern, has had a 15-minute phone conversation with the Northern Secretary, Peter Hain.

A spokesperson for the Minister, who is in New York to attend a UN Summit, said he expressed concern to Mr Hain at the 'ongoing sectarian attacks on vulnerable nationalist communities which culminated in the Loyalist rioting in recent nights'.

Earlier, Mr Hain said a British government verdict on the ceasefire status of loyalist paramilitary organisations will be given within days.

After being briefed at Stormont Castle by the PSNI Chief Constable, Sir Hugh Orde, on the violence that raged across Belfast and surrounding towns for two nights, Mr Hain confirmed he was set to announce his course of action.

He has been under intense pressure to specify the Ulster Volunteer Force for carrying out a gangland killing spree against rival loyalists. The UVF and the Ulster Defence Association have both been blamed for the weekend mayhem.

Mr Hain, who studied CCTV footage of gunmen opening fire on police and soldiers, and petrol bombers attacking security lines in Belfast, in Co Antrim and in Co Down, said he was horrified by what he had viewed. 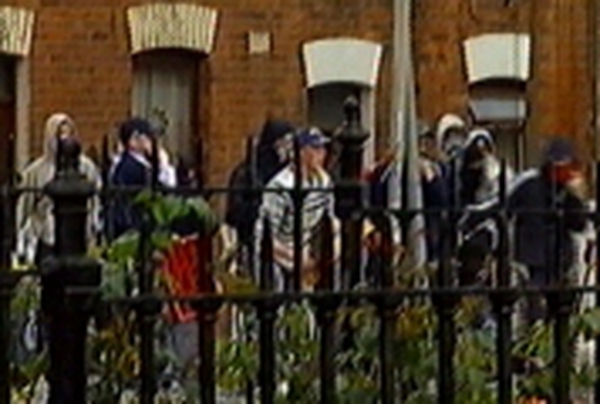