Cardinal Ratzinger was elected on the fourth ballot, and has chosen the name Benedict XVI. He was long seen as the front-runner.

Pope Benedict will be inaugurated on Sunday 24 April in St Peter's Basilica. The ceremony will be the simple one instituted by Pope Paul VI, the last Pope to be crowned with the Triple Tiara.

The election of the 265th pontiff on only the second day of a conclave was signalled by white smoke from the Sistine Chapel chimney, and the tolling of the bells of St Peter's Basilica.

But there were many minutes of confusion over the colour of the smoke, which initially seemed grey, before the bells began tolling to signal the successful election.

Even Vatican Radio had initially said the colour of the smoke was unclear. Black smoke indicates an inconclusive vote.

Tens of thousands of people in the square cheered when the vote was confirmed.

It was only the third time in a century that a pope had been chosen on the second day of a conclave.

The 115 cardinals from 52 countries who were eligible to elect a new pontiff started their secret meeting on Monday. Three earlier votes had been inconclusive. 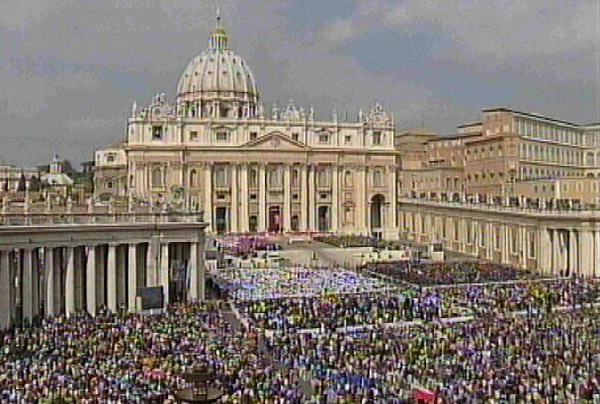