Lebanon's pro-Syrian Prime Minister Omar Karameh tendered his cabinet's resignation today during a parliamentary debate on charges the government had a hand in his predecessor Rafiq al-Hariri's murder.

He said his government was resigning out of concern that it did not become an obstacle to the good of the country.

Earlier, Mr Karameh had denied his government had a role in the murder during the stormy parliamentary debate.

Outside the building in Beirut, at least 20,000 people massed in a demonstration calling for the withdrawal of Syrian troops from Lebanon.

Before the debate began, the parliament observed a one-minute silence in memory of Mr Hariri, who was killed in a bomb blast in Beirut on 14 February along with 17 other people.

Overnight, soldiers took no action against demonstrators draped in Lebanese flags who staged a sit-in in Martyrs Square, near the former Prime Minister's grave.

They let small groups join the protest, despite an official ban, but the crowd of a few thousand was smaller than the tens of thousands that have marched over the past two weeks.

Protesters demanded the government resign and chanted 'Syria out' and 'Freedom, sovereignty, independence'. 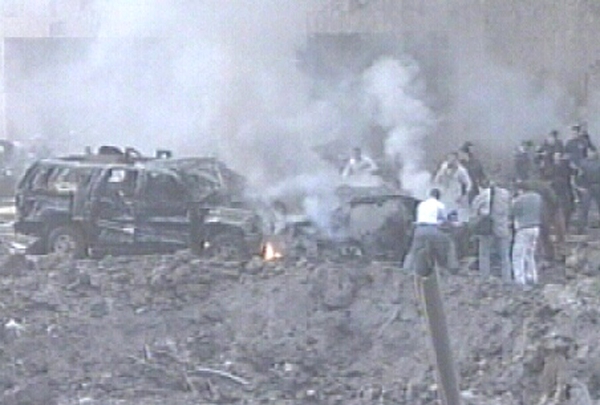