Sinn Féin's Gerry Adams, Martin McGuinness and Martin Ferris have issued a joint statement in which they categorically deny that they are members of the IRA or its Army Council.

The statement said Sinn Féin is totally committed to the peace process and to engaging with the Irish Government to find a way forward.

It continued: 'Our involvement in the peace process is as leaders of Sinn Féin and as elected representatives for West Belfast, Mid Ulster and Kerry North respectively. As part of this, in the past we have met with the Army Council to put propositions regarding the peace process.

'Sinn Féin's contribution to this process has been substantial and we will continue to play our part. For some time now Michael McDowell has been unable to distinguish between his role as Justice Minister and President of the Progressive Democrats. He has made countless unsubstantiated allegations against our party and its leadership.

'Recently the Irish Government accused Martin McGuinness and Gerry Adams of withholding information and of conspiring to rob the Northern Bank in December. We challenged the Government to stand this accusation up and they failed to do so.

The Sinn Féin statement concluded: 'At the weekend Michael McDowell made his unfounded and serious allegation that we - Martin McGuinness, Martin Ferris and Gerry Adams - are members of the IRA Army Council. For Minister McDowell to do this is an abuse of his office. If his view is shared by the gardaí then the only way this issue can be confronted is for us to be charged with IRA membership'.

Earlier, the Taoiseach, Bertie Ahern, said neither he nor the Minister for Justice had ‘personal knowledge’ of who was on the IRA Army Council.

Mr Ahern said Mr McDowell had access to intelligence briefings, but that hard evidence was another matter.

He added that he did not have the ‘professional assessment’ of the gardaí on the matter, as he had on the Northern Bank robbery.

The Taoiseach also said that he was still prepared to deal with the Sinn Féin leadership, despite the events of recent days, because it was the only way to get trust and confidence back into the process.

He said they had to come back with a clear undertaking of an end to paramilitarism, full decommissioning of all weapons and a cessation of all forms of criminal behaviour.

He was speaking at a joint news conference with PSNI Chief Constable Hugh Orde at Hillsborough, where both police forces signed joint protocols aimed at further improving the close working relationship between the two forces.

More than £3.1 million sterling has been recovered by gardaí in raids over the last several days in Cork, Dublin, Offaly and Kerry.

The Minister for Enterprise, Trade and Employment, Micheál Martin, has said he believes the Provisional IRA was responsible for the alleged money laundering operation.

Mr Martin said trust between the Government and Sinn Féin has been shattered by recent events, including the Northern Bank robbery.

He said there was now a huge onus on Sinn Féin and the provisional movement to make it crystal clear they are going to end criminality once and for all, and bring a total end to paramilitaries, before progress could be made in the peace process. 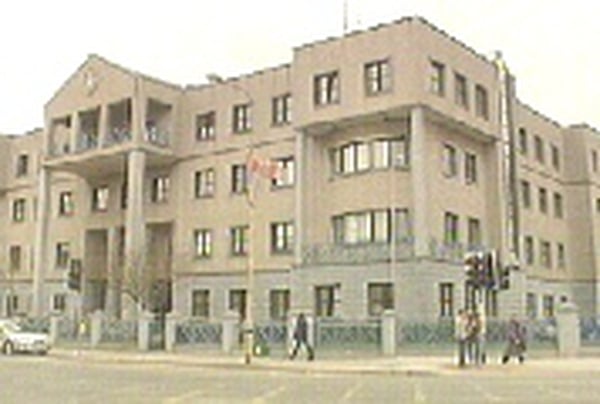