According to a DUP spokesperson, Ian Paisley will meet with the Minister of Foreign Affairs in Hillsborough on Wednesday.

Tonight the Taoiseach spoke with Dr Paisley after the DUP leader said he would break off contact with the Irish Government over remarks made by Bertie Ahern.

Following the conversation, Dr Paisley had said that while he accepted the Taoiseach's apology, the DUP's boycott of the Irish Government was still in place.

This morning Mr Ahern conceded that the demand for photographic evidence of IRA decommissioning was not going to achieve a deal in Northern Ireland.

A spokeswoman for Bertie Ahern said that he had told the DUP leader that he was merely outlining the position that had been set out by the Sinn Féin leadership after their meeting this morning.

However, the DUP is now insisting that Dr Paisley will meet with Foreign Affairs Minister Dermot Ahern if the Taoiseach clarifies the position on photographic evidence in the Dáil on Wednesday.

After meeting Sinn Féin leaders Gerry Adams and Martin McGuinness in Dublin this morning, Mr Ahern said the issue of photographs was not workable and that some other way would have to be found.

The Taoiseach said he hoped that outstanding issues preventing an overall agreement to restore devolution to the North could be resolved before Christmas.

He repeated his view that it would be insane to allow the deal to slip away after so much had been achieved.

Verification was one of the issues that blocked an agreement that could have seen the Provisional IRA putting its entire arsenal beyond use by the end of this month.

The Government is anxious to keep up the pressure for a deal despite last week's setback and wants to maintain some momentum in the process.

After today's talks, which were also attended by Justice Minister Michael McDowell and Foreign Affairs Minister Dermot Ahern, the Taoiseach said that the big issue was that decommissioning was ready to happen if a comprehensive deal was done.

On the subject of an end to IRA criminality, Sinn Féin President Gerry Adams repeated his claim on RTÉ Radio that criminal behaviour was inconsistent with being an IRA activist.

Asked where that left the killers of Garda Jerry McCabe, Mr Adams said that that should not be the current focus.

Speaking after Mr Adams' remarks, Mr McDowell said agreement remained within reach but warned that there could be no deal with republicans unless the issue of IRA criminality was tackled.

He said there was no scope for what he called 'wriggle room' or ambiguity on the issue.

The minister said there is no disagreement between Fianna Fáil and the Progressive Democrats on the way forward in the peace process.

Mr McDowell added that there was no substance to reports that the two Coalition parties were divided on the issues.

Today's round of talks was the first of many this week aimed at securing agreement between Sinn Féin and the DUP.

The Minister for Foreign Affairs and the Northern Secretary, Paul Murphy, will meet the North's political parties on Wednesday.

And on Thursday, the issues will be discussed by the Taoiseach and the British Prime Minister, Tony Blair, on the margins of an EU summit in Brussels. 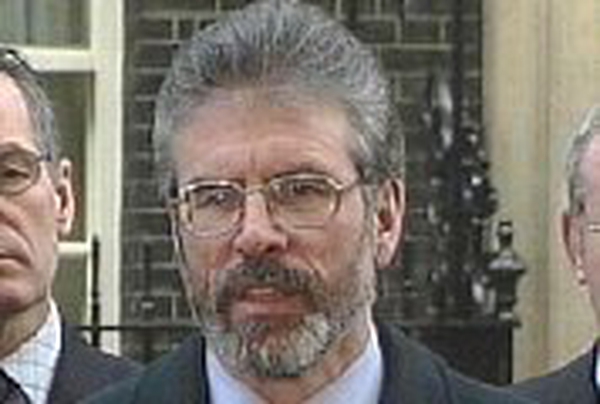