One of the groups involved yesterday’s May Day protests in Dublin has blamed policing decisions for last night's trouble.

The Dublin Grassroots Network says the authorities are lucky that more people were not injured in the stand-off at the Ashtown Gate entrance to the Phoenix Park.

A spokesperson for the group, Aileen O'Carroll, told a media briefing today that a number of protesters were injured by Garda batons.

Late last night, 29 people were brought before a special court sitting in Dublin following disturbances near the Phoenix Park.

Violence broke out briefly at about 8.30pm last night after gardaí prevented marchers from the Network from approaching the Government guesthouse at Farmleigh.

European heads of State were attending a celebratory dinner for the 10 new European Union member states at the time.

Some 2,000 protestors gathered near the Ashtown Gate of the Park.

A number of protesters, some masked and dressed in black, attempted to break through the Garda cordon and beer cans, sticks and placards were thrown at the gardaí.

Garda enforcements were brought in and the Garda riot squad and water cannon were used to hold the protesters back.

By 9pm, the gardaí had succeeded in moving the protesters back from the gate to the park.

The protesters were then moved further back along the Navan Road towards the city centre, and by 12am most of them had dispersed.

UK, US & Swiss nationals among detainees

Most of the 25 men and four women who were arrested on public order offences were Irish, but two Britons, an American and a Swiss national were also detained.

At the special sitting at Cloverhill District Court, 21 of those charged were remanded in custody in Cloverhill Prison, the four women were brought to the Mountjoy women's prison while the remaining three people were released on bail.

One female Garda officer was injured during the protests but her injuries were not serious. 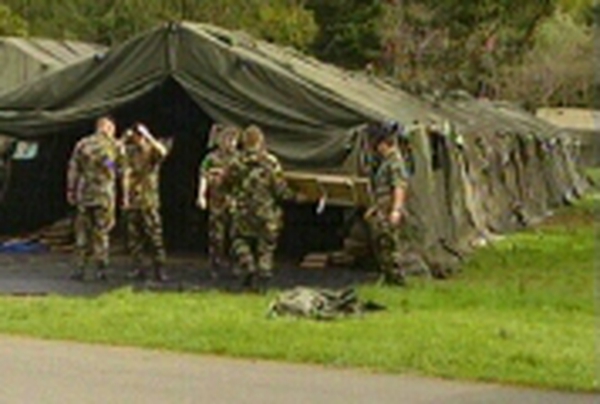