Max Ó Floinn and Victoria van der Speck are a Sligo-based couple in their early 20's who feature in Tras, part of the documentary series Tabú, due to be broadcast on TG4 on Wednesday.

Produced by Ann Ní Chíobháin, and directed by Medb Johnstone, the film is about gender non-conformity, changing gender and the Irish transgender community, with a particular focus on Max and Victoria’s lives as young Irish trans people.

The pair dropped in for a chat with Ray D’Arcy today. As the guests were settling, Ray said: "Throughout this interview, I may say things that aren’t correct, because there’s a whole language around transgender and we’re all getting to grips with it, people outside the transgender community. So, if I do, I apologise in advance, it’s not in any way malicious or I don’t mean to make you feel uncomfortable. But I’d love to be corrected. And I think the more open conversations we have, the better it gets, isn’t it?"

Max and Victoria chipped in with "OKs" and "yeps" as Ray was speaking and the conversation flowed from there.

Like many Irish couples, Max and Victoria met as teenagers in the Gaeltacht. Coláiste Spleodar in 2013, to be exact. Two years later, Victoria, who is originally from Cavan and Max, who hails from Leitrim, both signed up for a day trip to Tayto Park.

The pair found themselves on the same bus and immediately clicked, bonding over chats about dyslexia among other things. The friendship continued and deepened on a long-distance basis via text and social media.

Max told Ray: "I kind of started developing feelings for this person that I was talking to and then after about two months, she came out to me as being trans."

Victoria spoke about why Max was the first person she spoke to about being a trans woman: "It had been on my mind for a while at that stage, so at that point, it was some kind, random person from Leitrim, that I was just like, if I can’t come out to this person, I’m just going to be in the closet forever. So I just kind of went for it."

Max and Victoria, the obstacles they face as they forge their own identities. pic.twitter.com/uNlT4trOZR

Victoria, having been assigned male gender at birth, was still attending an all-boys school and had yet to come out to her parents. She says it wasn’t easy: "When you’re young, a lot of things are very scary."

While Max says he was very open to hearing Victoria’s story and, pretty unfazed by it, he also says he was on a learning curve:

"When Victoria told me that she was a trans woman, I was like, I don’t really know what that means but I’m gonna try and educate myself on that. So I kind of started doing my own research to help this person."

Max has since come out as a trans man. He describes it as "a slow process" that involved some experimentation with gender fluidity along the way. The discussion turned to labels. Max says he’s in two minds about the usefulness of applying labels to people:

"Labels aren’t, they shouldn’t be a huge big thing, but they’re important to some people because I remember when I started experimenting with gender fluidity and kind of telling that to Victoria, she kind of struggled with the idea of an inbetweeny gender, because she knew that she was a binary trans woman." 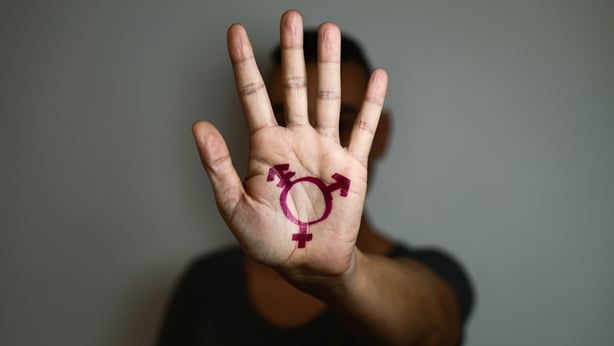 In Max’s view, labels can play a role is when people finally find the words to express something that wasn’t talked about when they were growing up: "It’s kind of important to some people to say 'I am this.’ Because a lot of people grow up without having that language.

"Once you kind of find a word to describe how you’re feeling, that label can be very important and I think we do need to understand that they’re not the biggest thing, but also to respect people who feel the need to have a label."

Victoria says in her view, Irish society is changing in some positive ways: "There is an increasing gender non-conformity, which is very beneficial for a lot of trans people who are trying to explore themselves."

Max and Victoria expand on their experience with access to hormone treatment and surgery in Ireland and abroad, family support and the positive effects of normalising gender-neutral language in the full interview with Ray D’Arcy here.

The Tabú documentary, featuring Max Ó Floinn and Victoria van der Speck, can be seen on TG4 on Wednesday night 26th February 2020 at 9.30