While many will argue that our recent adoption of Galentine's day is nothing more than yet another attempt by card companies to extract even more money from us, I believe there is something wonderful about a day that celebrates female friendship.

While Mother's, Father's and Valentine's Day usually celebrate just one individual and can be easily acknowledged with a gift or card, Galentine's day encourages us to get out and spend some time with those we may not get to see as often as we like.

When is it?
Galentine’s day is celebrated on February 13th, the day before Valentine’s. This year’s festivities may need to be reined in or moved online to a Zoom party, but you can always find a way to celebrate the women in your life - even if it's just by sending a thoughtful text.

Where did it come from?
The origins of the day are relatively recent and decidedly less solemn and spiritual than its sister celebration Valentine's day.

Rather than being based on the life of a saint, Galentine’s day first appeared in season two of the comedy cult classic Parks and Recreation.

Back in 2010 protagonist Leslie Knope, played brilliantly by Amy Poehler, decided to gather a group of women for a breakfast the day before Valentine’s Day, an occasion that was described as 'ladies celebrating ladies’.

The day becomes an annual event with attendees being gifted essays on why they are so awesome, needlepoint pillows with their face on it, and a personal mosaic portrait made from crushed cans of their favourite diet drink.

Knope declares: "February 14th Valentine's day is about romance but February 13th, Galentine's day, is about celebrating lady friends. It’s wonderful and it should be a national holiday."

What sort of events are on offer?
There are usually a number of Galentine events announced close to Valentine's day, some of which are on the night itself while others take place over the weekend.

This year, due to COVID, festivities will be put on hold but there are some great take-home boxes being offered up by restaurants across Ireland if you want to treat yourself or any of the ladies in your social bubble.

Considering Leslie herself likes to ‘kick it breakfast style’ on the big day, breakfast, brunches or anything with waffles at its core is a must... even if it has to be over Zoom this year.

What to gift?
Unlike the more materialistic Valentine's day where gifts and cards are expected, going by the example set by Leslie Knope we should be making thoughtful gifts. I mean who couldn’t do with a 5,000 word essay on their wonderfulness?

However, others are now getting in on the act with sites like Funky Pigeon and Etsy selling cards and gifts to celebrate the greatest gals in your life.

Yet perhaps the greatest thing about Galentine's day is that while it’s now widely known it has not yet become obligatory in the same way other holidays have.

In short, no one is expecting anything so even the smallest gesture will be welcomed as a lovely surprise.

So gather the girls and enjoy the excuse to get together for a virtual chat. 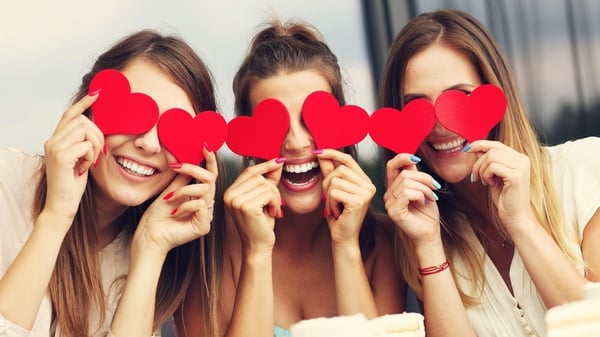 Galentine's Day: In praise of putting female friendship first whether you're single or not