Drag queens no longer exist on the fringes of society thanks to TV shows like RuPaul’s Drag Race and the explosion of drag events from themed brunches to bingo.

RuPaul’s Drag Race UK starts today, and we are so excited to see Belfast's Blu Hydrangea in the lineup! For now, it's only available to watch online on BBC Three via BBC iPlayer. Graham Norton and Alan Carr are on the panel, and guest judges including Andrew Garfield, Maisie Williams, Michaela Coel and Geri Horner.

For many drag queens, the main way they express themselves is through fashion and beauty – so expect extremely glamorous clothes and a lot of sparkles if you watch the programme or go to a drag show.

You may know the likes of Sasha Velour – one of the world’s most famous drag queens – but what about some other extremely glamorous faces to fill up your Instagram feed?

1. Miss Fame
Miss Fame has made the crossover from drag artist to bona fide high fashion darling. She was the first drag queen to walk the Cannes red carpet and was front row at various shows during June’s couture week in Paris. If she’s good enough for Maison Margiela, Iris van Herpen and Jean Paul Gaultier, she’s definitely good enough for us.

Her style is less glitter everywhere, more high fashion diva. Think sharply tailored suits and headpieces which double up as wearable art – everything is as perfectly polished as it is self-referential. Ever since appearing on RuPaul’s Drag Race in 2015, Miss Fame has really lived up to her name, signing with prestigious agency IMG Models and even releasing her own make-up line.

2. Pearl Liaison
Pearl Liaison’s style is basically Christina Aguilera meets Marie Antoinette – a combination we never knew we needed in our lives. Her hair and make-up is super costume-y – when she has a theme, she really runs with it.

In an interview with Out, Pearl says she’s an "eclectic dresser" and describes her character as "Stepford wife robot b****".

Like Miss Fame, Pearl has dabbled in high fashion – she appeared in Dazed magazine wearing Gucci and Louis Vuitton.

3. Glamrou
If you ever wondered what an Iraqi-British Muslim drag queen was like, look no further. Glamrou (who prefers to be referred to with gender-neutral pronouns) loves big, multi-coloured wigs and OTT make-up, but what sets them apart are the outfits. They love to pay homage to their Islamic background with traditional outfits – but with a drag twist. And yes, that often means sparkles.

Glamrou is also an inspiring voice on politics and culture today, so definitely worth a follow on social media – for the commentary as well as the outfits.

4. Lucy Stoole
The theme of this year’s Met Gala was all about campness, and for the occasion, Lena Waithe wore a suit with the words "Black drag queens invented camp" emblazoned on the back. It’s a reminder of the cultural influence of black drag queens, something which is often overlooked.

Lucy Stoole is an example of a black drag artist killing it. The Chicago-based performer is incredibly experimental with her make-up, often painting a full face of patterns and colours. Her style tends to be on the risque side – lots of underwear, corsets and PVC dresses.

If you want any inspiration on how to properly jazz up a beard, this is the queen for you.

Her style is all about opulence and luxury – think leopard print catsuits, feathered gowns and lots of tributes to traditional outfits worn in Cameroon, where she was born.

6. Panti Bliss
No list of inspirational Drag Queens is complete unless you've mentioned the Queen of Ireland herself, Dr. Panti Bliss. This Queen is a sparkling national treasure known for tirelessly campaigning for gay rights, lighting up Dublin's nightlife and being an all-around living legend.

When it comes to fashion, Panti is known for colourful, beautifully fitted, dresses and big blonde hair. We imagine she takes inspiration from Dolly Parton, who once said: "If anyone tells you your hair is too big, get rid of them. You don't need that kind of negativity in your life."

Panti's style is so iconic, in fact, one of her dresses was put on display in the National Museum of Ireland. The dress in question was worn during the activist's hard-hitting speech, The Noble Call, which is considered to be a fundamental moment in the lead-up to the Marriage Equality Referendum. 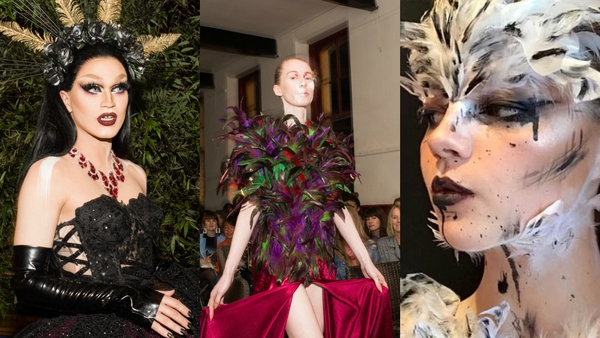