Is there anything more inherently satisfying than a really well-executed piece of DIY?

From simple IKEA light stand to ambitious loft extension, there’s just a wonderful feeling of achievement, being able to survey something you built with your own two hands.

This year, one of the UK’s flagship DIY stores, B&Q, is celebrating its 50th birthday – so what better time to take a look back at several decades-worth of tool sets, hammering mishaps and ‘tackling the task ourselves’?

A cultural phenomenon
Over the years, DIY has lodged itself in common understandings of gender and class. The traditional ‘man of the house’ is expected to be competent with his hands, while ‘good at DIY’ is reliably near the top of every poll on most attractive male qualities. Charm, wealth, good looks – nothing compared to a virile ability to unblock a sink.

Consequently, the ‘handyman’ is often portrayed as a muscular, salt-of-the-earth hunk, and regularly parodied in modern Halloween costumes. Think the rose gardener in Sex And The City, David Hodo from Village People, or the entire plot of Lady Chatterley’s Lover.

Socially, DIY is less a symbol of working-class pride as it is a source of middle-class mockery. For decades, film and TV has harpooned henpecked husbands and hysterical housewives for calling in a professional, before discovering that the appliance in question was simply switched off at the wall.

Most sitcoms feature at least one ‘DIY disaster’ episode, but the trope predates Irish or British television. In their 1940 short, A Plumbing We Will Go, The Three Stooges are roped in to fix up somebody’s bathroom – only to mess up so badly that water spews from every nook and cranny except the taps.

Mired in stereotype, many of these characterisations now feel jarringly dated, but they retain a certain power in how DIY is perceived.

An evolving medium
In its loosest sense, the history of DIY is the history of mankind. When our primate ancestors developed the ability to use tools, the private construction firm was still two or three million years away, but they were undoubtedly making things themselves.

In ancient Egypt, most citizens were responsible for their own homes, which they constructed with a classic blend of mud and straw. In 2010, Italian archaeologists discovered a 6th century temple, which seemed to come with a full set of engraved assembly instructions. It was promptly christened the forerunner of the flat-pack.

DIY as we know it originated during the late 1940s and 50s. After the traumas of the Second World War, money was tight and building materials thin on the ground, so a lot of people started taking on home improvements themselves.

"It’s a trend which has set a course for the following decades," says architecture and design historian, Tom Dyckhoff. "In times of austerity, you generally see people taking things into their own hands and performing projects themselves."

Through the 1960s, the nascent movement grew. "There was a cultural shift towards individualism, expressing your personality, and counterculture", Dyckhoff explains. By halfway through the decade, big brands like Habitat were retailing instructions-on-the-back "knock-down" furniture that helped kick-start the DIY-lite flat-pack revolution. (They were followed, of course, by arrival of IKEA in the late-1980s, which would cement the status of the flat-pack in the average front room.)

Tapping straight into the zeitgeist, Richard Block and David Quayle opened Britain’s first B&Q in Southampton in 1969, solidifying DIY as a public-wide possibility. No more would homeowners have to rely on building suppliers and hardware shops – materials and tools could now be accessed all in one place.

The 1970s marked perhaps DIY’s golden age. "A boom in home ownership and the extension of mortgages for the first time encouraged a sense of pride in ‘doing it yourself’," says Dyckhoff. "This do-it-yourself revolution gave young British homeowners a bold new sense of self-sufficiency. It offered an alternative to relying on others and was used as a way to inhabit something you’ve created yourself."

Though cultural shifts have proved a pivotal piece of the DIY puzzle, it was technology that allowed to flourish. Before the internet, DIY wisdom was spread by professionals, magazines, or word-of-mouth. Sites like YouTube now mean the same word-of-mouth can reach millions, driving even high-street giants like B&Q to post instructional videos of their own.

Though stalwarts like spanners and hammers still look much the same as they did before the wars, new generations of domestic tech are increasingly adept at doing it by themselves. Large, lumbering lawnmowers have now been replaced with small, manoeuvrable gizmos, some of which use sensors to mow of their own accord. Roll-on wallpaper can now cover a room in a day or two, without the need for time-consuming cut and paste, while the invention of Polyfilla has turned structural fixes into simple afternoon tasks.

Business meets pleasure
Today, DIY is often a hobby as much as a money-saver or necessity. It can, for instance, be a point of pride for a new parent to build their first child’s cot – even though basic high-street options may be cheaper than the materials required to do a good job.

The sheer pleasure of home improvement continues undimmed, whether it be knocking together a new table for the spare room, showing off a converted shed on Instagram, or channelling a bit of that ‘man of the house’ pragmatism with a vest, shirtsleeves and fully-loaded tool belt.

With YouTube at your side, there’s never been less reason to call in the professionals. Just don’t overreach – perish the thought you might be cited as a cautionary tale, after trying to replace your plumbing with Blu Tack and a pair of pliers…

If you have an upcoming DIY project in mind, why not do it sometime between the 19th and the 28th of April as part of RTÉ's brand new show The DIY Challenge? You'll be in with a chance to win €10,000! Plus, you'll get the chance to show off your DIY skills on TV.Click here for more info. 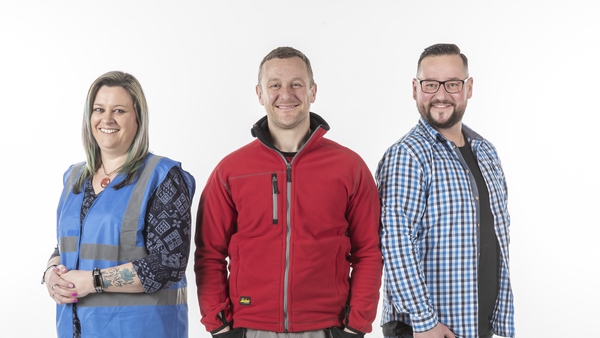 Could your DIY project win you €10k? Apply to RTÉ's new show now!