The Irish Independent leads with the line that KBC Bank is to cut its rates to new borrowers by between .1% and .6% and is offering a fixed rate for a year of 2.9% to anyone who is prepared to switch to the bank.

"Abortion vote will not be held until 2018 at the earliest"
That's the headline in the Irish Times over its report on the decision by Fine Gael and the Independent Alliance to block a Bill, which would have paved the way for a referendum on abortion.

In a follow-up to Monday's lead story about how GSoc has hit a legal barrier getting access to Garda files related to the whistle-blower controversy, today's paper leads with the line that the Garda Ombudsman will now have to obtain a High Court order to access documents from the O'Higgins inquiry. 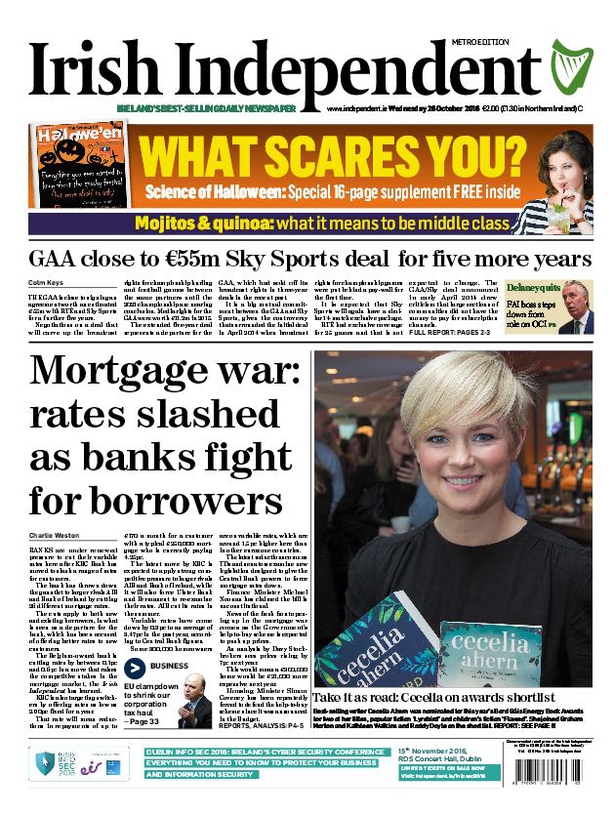 The Minister for Transport Shane Ross support suggestions that we need a dedicated Brexit Minister.
That's the lead story in Irish Daily Mail.

The Evening Herald leads today meanwhile with the death of 20-year-old Jane Dardis from Skerries in Dublin who was killed when the car in which she was travelling with 2 of her work-mates hit a wall shortly after midnight on Tuesday.

The Irish Daily Star leads with what it has dubbed as a "world exclusive" a picture story about Christy Kinahan Senior who we're told he is currently living in a 5-star hotel in Hong Kong.

John Delaney's resignation as Vice-President of the Olympic Council of Ireland is carried on the front of the The Irish Times and The Irish Examiner.

Back on the front of the Irish Times there's a report on an inquest into the death of a baby who died 3 days after his birth following a series of system errors when he was being delivered at Kerry General Hospital in March 2015.
The hospital apologised to Sinead Scanlon and her partner Mike Mangan at yesterday's hearing.

On the front of The Examiner Cork City Council paid out more than 4 million euro in compensation for falls last year.

That discovery of 5 million euro worth of cocaine packed into a torpedo-shaped container on a beach in Co Clare, meanwhile, provides the lead story in today's Irish Daily Mirror and Irish Sun.  The proximity of the find to a well known tourist spot prompts the headline in The Mirror:"Sniffs of Moher" while The Sun opts instead for "Ready to Blow". 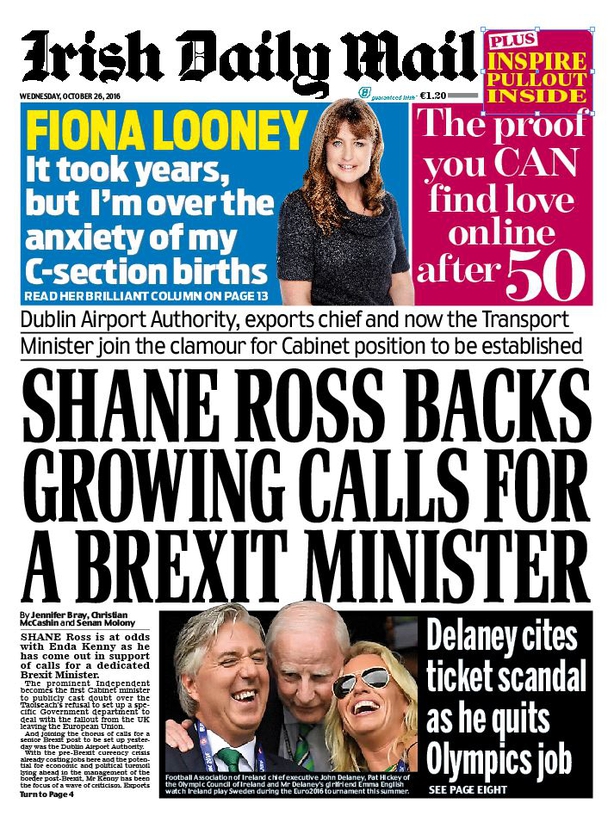 Elsewhere this morning:
The death of Ann Lenihan...the wife and mother of the late Brian Lenihan Senior is reported in most of today's papers.
The Irish Times report appears on the same page as a picture of Leonie Reynolds the daughter of the late Albert reynolds alongside her mother Kathleen at the Four Courts yesterday...following her appointment as a High Court judge.

The Chief Executive of Mayo County Council, Peter Hynes, has written a piece for today's Irish Times in which he defends the new Mary Robinson Centre in the former president's hometown of Ballina, following Diarmuid Ferriter's criticism of it in a piece her wrote on Saturday. "Robinson centre is an opportunity...not a vanity piece" is the headline there.