Depending on who you follow on Instagram and Twitter, you may have seen influencers and influencer-adjacent figures trading their Starbucks for a thin, watery green juice in recent weeks.

If you follow Caroline Calloway, for instance, you'll already know that this is celery juice and it's the Internet's newest health obsession. You'll know because she seemed unable to not mention it once for a few weeks.

Started by Anthony William, an author of four books covering liver, thyroid and general health, the Global Celery Juice Movement has been adopted by everyone from Gwyneth Paltrow (of course), Pharrell Williams and Sylvester Stallone.

Calling it a "miracle juice", William instructs followers to drink 16 oz (or roughly 475ml) of "pure, straight celery juice" on an empty stomach. This - and only this; no honey, lemon or other fruits and vegetables included - he claims can cure a range of "chronic and mystery illnesses", from ADHD and psoriasis to rheumatoid arthritis and Lyme disease. He even claims it helps overcome addictions.

His recipe calls for a large bunch of celery, rinsed and run through a blender to get at least 16 oz. If the taste is too strong for the uninitiated, he suggests starting with 16 oz of cucumber juice and building up your tolerance. For the die-hards, you can drink 32 oz (946ml) in two sittings, always waiting around 15 minutes before eating food.

One of the secrets in this allegedly potent drink is the "undiscovered sodium cluster salts" it contains, which, conveniently, William has discovered.  They are "critical for the brain", he says. It also "brings down toxic liver heat" and "kills Epstein–Barr and shingles virus".

This, you can imagine, infuriates many in the medical profession, those who have studied for years upon years to be able to advise and treat people for chronic and often deeply distressing conditions.

"It’s nonsense", says Prof Caitriona Ryan, an expert dermatologist based in Dublin. She adds that there is "absolutely no evidence to substantiate it, not even a 30-person placebo controlled trial".

We contacted Anthony William to discuss the movement in more detail, but were redirected to the information on his site instead.

"My problem with this is, we’ve fake news of every sort but fake news medically can be detrimental to the patient.

Prof Ryan explains why those suffering with skin conditions such as acne, psoriasis and eczema - "very, very impactful diseases" - are some of the most vulnerable patients out there: "They’ve shown that severe psoriasis is more impactful than having cancer or depression on your psychological functioning."

For Prof Flanagan, a dietitian at Be Nutrition Wise, the lack of attention paid to the adverse effects of guzzling so much celery juice, which can range from oral allergy syndrome - a reaction that could be an itchy mouth or anaphylactic shock - to photosensitivity and blistering of the skin in sunlight.

This would be in much lager doses of the juice, but "it just shows you that something as innocuous as celery juice, for someone, could cause a problem", she says.

"The thing that amazes me is that intelligent people follow him", she adds. "Anything that says "miracle cure", you have to stop and go ‘okay, what is the evidence behind this? Who is the person behind this? Are they qualified to give this advice? Are they making money from it?’"

For Prof Ryan, one of the most disconcerting things about wellness fads like the Global Celery Juice Movement is that is costs vulnerable patients time and effort.

"It’s more the delay of people going for proper treatment, putting their faith and confidence into what seems like [a] very arrogant message. If any drug company came along and talked about their drug in the same way, they’d be in an awful lot of trouble."

Like the majority of wellness and health fads worth their "salt clusters", the celery juice trend got off the ground with the help of Goop - Paltrow's wellness company - and YouTube.

William states outright that he is not a doctor, and has no medical training, but in the wellness-obsessed world of Goop and its team of "medical experts", this can be interpreted as a positive rather than a negative by people disillusioned from traditional treatments.

He also states outright that although the Global Celery Juice Movement is a sweeping and hugely successful phenomenon, there have been no studies carried out on its health benefits, least of all when it comes to chronic illness. 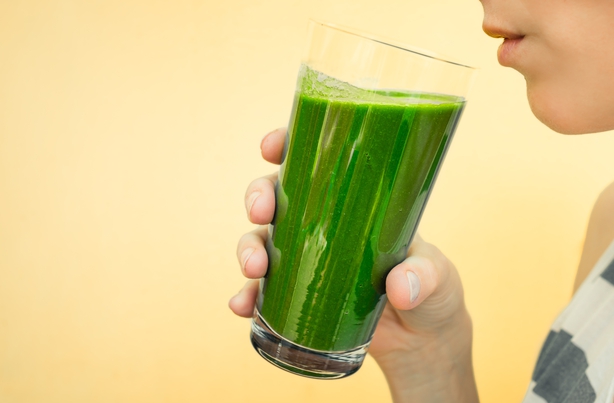 So how does he know all of these secrets? A Spirit told him.

"When I was four years old, I heard a voice", he says in a YouTube video, which is followed by a reenactment of this moment. A disembodied voice tells a young Anthony that "I am the Spirit of the Most High. There is none above me but God, himself", before appearing at the dinner table and coaching the boy to say "Grandma has lung cancer".

He says that his grandmother then went to her doctor, who confirmed she had lung cancer, and since then William has been advising clients with difficult or mystery illnesses, through the power of Spirit.

Even if there wasn't a spirit involved in this discussion, it would still be about the move away from traditional medicine to non-traditional treatments, which can range from homeopathic use of lavender oil for sleeping at its most innocuous, to herbal supplements that can send patients into liver failure at its most sinister.

"We’re living in the Trump era where people don’t want to listen to the experts", Prof Flanagan says.

"I’ve had people try all sorts of other quacky style things that could be much more damaging to their health. At least [celery juice is] not something that could be potentially dangerous to them", Prof Ryan says.

"There is a place for complimentary medicine, but it has to be founded on proven benefits, and there is no proven benefit here at all."

A cursory look through the #celeryjuice hashtag on Instagram will show countless side-by-side comparisons from those convinced the drink has eased their chronic acne or arthritis, and it must be said the photos are compelling.

There's also the testimony of stars such as Miranda Kerr, who can hold a plank for 10 minutes, and Robert de Niro, Hollywood legend and pillar of legitimacy in the eyes of the public.

Something here is working, but what is it?

Prof Ryan says that there are anti-inflammatory minerals in celery, such as zinc, which can soothe conditions like acne but "it’s certainly not curative".

As for the detoxing qualities of it, Prof Flanagan explains that "our bodies are well capable of detoxing ourselves with our kidneys and livers and lungs doing that without us drinking copious quantities of juice". She also adds that "We know through the DASH diet that diets high in fruits and vegetables help to reduce blood pressure, so celery falls into that camp".

More than this, however, both Prof Ryan and Prof Flanagan agree that any change in appearance is likely due to a broader shift in a person's health rather than the result of one "miracle cure".

"When somebody goes on a diet or they take up something healthy, often they will - unknowingly - be living healthier in other ways, too", Prof Ryan says.

The fact remains, however, that there is no study on celery or celery juice that backs up William's claims, and with the trend around for the past 20 years in some form or another, there has been ample time to carry one out, says Prof Ryan.

"If this guy, if he’s talked to by his ghost and fully believes in this, he could easily do a study, but I don’t think that he would expose himself that way."

What is a toxic friendship, and how can you get out of one?

What to do if your nails, waxing or botox needs topping up now