Monaghan woman Caitriona Balfe walked the red carpet of the 2019 Golden Globes at The Beverly Hilton in California last night.

The actress was nominated in the 'Best Performance by an Actress in a Television Series – Drama' category for her work on Starz’s Outlander.

This is her fourth time being nominated for the award for her role as Claire Fraser in the popular time-traveling series.

Styled by Karla Welch, Caitriona wore a custom gown by Moschino which she paired with black Jimmy Choo shoes and Beladora jewellery.

Hairstylist Gareth Bromwell gave her a "fresh cut and a "slide of diamonds" while make-up artist Mary Wiles treated her skin to Skyn Iceland skincare.

She completed the look with a micro double circle bag from The Row which she accessories with #TimesUp ribbons.

At last year's IFTA Awards, Caitriona told RTÉ LifeStyle that she was delighted to take part in the movement and hoped to extend it for as long as possible.

"I think its a great statement but I also love the fact that there is a fund behind it and I think $13 million has been raised to give women an economic chance to actually bring some of these men to justice and I think that, that's fantastic," she said.

Ultimately, Caitriona lost the 'Best Performance' award to Sandra Oh for her incredible performance in Killing Eve but we couldn't be prouder to have an Irish woman nominated at such a prestigious awards show.

We're even prouder that she brought the tunes. 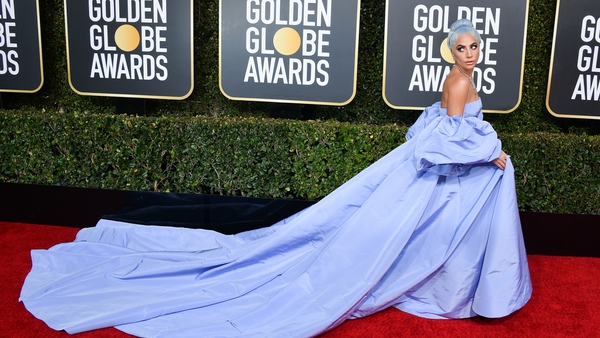