Final year students Olivia Holbrook and Rachael Ryan from DIT’s undergraduate course in Product Design have created a multi award-winning Menstrual Kit - TIDE, with aspirations to improve the lives of the 1.25 billion women globally, refugees in particular, who do not have access to sanitary products.

"We saw the plight of these women, with the refugee crisis, and although a lot of people are trying to help the refugees there isn’t much focus on women, or on sanitation for them during their period ... so that’s why we started there, to see how we could help."

The TIDE Menstrual Toolkit comprises of underwear, four reusable sanitary towels and info-graphic instructions; and is contained in a small capsule which is also a washing device. 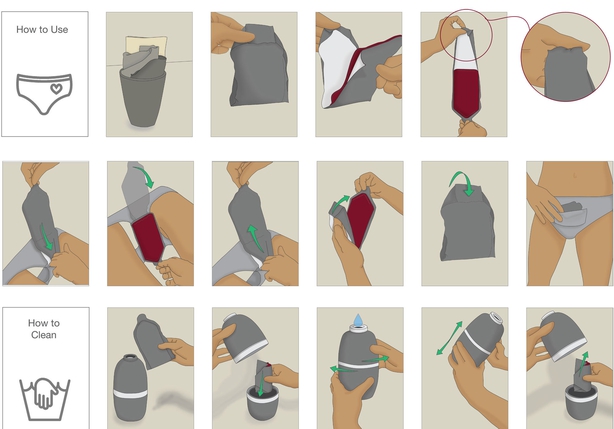 "When we went to speak to the women, we were nervous that they would be embarrassed or wouldn’t speak to us ... but once we were together and they were comfortable, they opened up to us.’

From speaking to the displaced women, Olivia and Rachael learned that in some cultures, the blood cannot be touched. Also, women would not use anything that had to go inside the body. These cultural norms were carefully considered and incorporated in the final design.

Both Concern and Action Aid are interested in the product and Olivia and Rachael hope to travel with them to refugee camps (campaí na dteifeach) worldwide later this year, to introduce it to the communities there.