Now that we know the names of the first ten countries to qualify for Saturday's Eurovision Grand Final, tonight it's the turn of eighteen more countries to battle it out for one of the the remaining ten places.

Irish viewers will get to vote in the second semi-final as Brendan Murray is competing and hoping to reverse Ireland's recent bad run of luck in the competition. So before tonight's show, here's a taste of what to expect.

As we've already said there's huge pressure on the shoulders of 20-year-old Brendan Murray from Tuam. Ireland have had a fairly poor run of it in the Eurovision recently and have failed to qualify for the past three years. Hand-picked by mentor Louis Walsh, the ex-Hometown lad has been handed a soaring ballad with more than a nod to Westlife (no surprise that co-songwriter Jörgen Elofsson contributed to several of their hits).

The big question is how will it do? On the downside it's hard to get away from the Westlife comparisons and the tune is a bit dated. However, Brendan's unique vocal delivery, effortless charm and some really good staging should see it scrape into the top ten if everything goes well. Best of luck to him!

Unfortunately for Ireland a number of other countries this year have gone with the 'good looking young lad sings ballad' approach and out of that bunch Bulgaria is definitely the best.

After finishing fourth last year, Bulgaria will be aiming to do even better with this beautifully produced track and, on a good night could, clinch the title for them for the first time.

This is one of the tracks we have loved from the get go. An absolute ear-worm of a tune that blends traditional gypsy rhythms with contemporary hip-hop. It shouldn't work but it does.

Not only that, in a year when we're meant to be celebrating diversity, it's one of only a handful of songs not sung in English. Even if you haven't a notion what the Hungarian or Romanian lyrics mean you'll be humming this for days. A dark horse.

Despite sounding like it was created in a laboratory with the DNA of previous Eurovision hits, this is nonetheless extremely catchy and wouldn't sound out of place on any current pop radio station.

It's a well crafted love song, very contemporary and it helps that duets always do rather well in the competition. Will sail through.

How good is this singer? Well she won The Voice of Australia back in 2014, so this Danish-Australian can definitely hold a tune and is no stranger to the big stage.

This is very slick and is all about the big chorus, which Anja handles with aplomb. Despite what some fans may think, it's not going to win but will place very well on Saturday night.

You knew there'd be an Ed Sheeran clone along at some stage didn't you? Well, here's Austria with another handsome young lad channelling the Edmeister to full effect.

Although the bookies have been a bit sniffy about his chances we reckon it should qualify, for it's sheer sing-a-longability alone. Expect Ireland to throw votes at this.

WORTH KEEPING AN EYE ON

It's The Script with lashings of yodelling. Yep, it's that bonkers.

A bit like Moldova the other night, this should hoover up votes from the public for being completely different and actually inject a bit of fun into the competition. Yodelayheehoo etc!

Another mental song, the fun here will be seeing how the singer will actually pull this off live on stage.

Why you ask? Well it's essentially a duet sung by one person, that's part opera and sung in two languages! You'd feel obliged to throw him a vote or two for the vocal gymnastics alone. As for the song? Disney on steroids.

Now this is a bit of tune. 80s vibes aplenty, yet completely contemporary, this track deserves your love. A total banger, this should qualify if there's any justice!

Another track that manages to stand out from the crowd by virtue of the fact that it isn't yet another overblown ballad or slice of electro-synth earnestness.

Hints of Mumford and Sons and a nice catchy chorus make this Belarus entry one to savour, even if it doesn't have quite the eye-popping appeal of a naked man and wolf like last year's.

The Eurovision Song Contest: Semi-Final 2 takes place tonight at 8.00pm on RTÉ2, with the Grand Final on RTÉ One on Saturday also at 8.00pm. 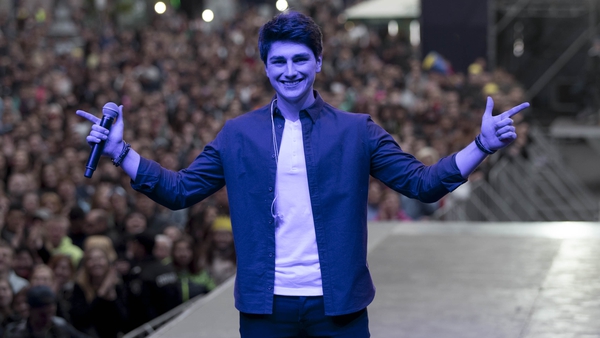