For a country that called the most destructive war in human history "The Emergency" and a centuries-long conflict in our own land The Troubles, it seems we have gotten our tweed knickers in an awful bunch over Wild Mountain Thyme.

How much of this is mock outrage, post-colonial cringing, or anger over cultural vandalism, I'm still not sure but such has been the opprobrium heaped upon director and writer’s John Patrick Shanley’s clunking cliché fest that you’d think the Brits were reintroducing the Penal Laws or that the price of a pint was about to go up by 10c.

What is beyond doubt is that watching this wonky donkey of a flick is like eating a five-day-old Irish stew. In the dark.

Of course, there are two ways of watching Wild Mountain Thyme. One is between your fingers as you sob, hands on face, rocking back and forth in a corner of your reclaimed Famine shebeen, clutching a Yeats anthology to your bosom, and mumbling stuff about 1916, the 1948 Republic of Ireland Act, the rural electrification scheme, indoor plumbing, the modernising crusade of Lemass, the constitutional crusade of Garret Fitzgerald, the Luas, and condom machines in pubs.

The other is smiling smugly, knowing that yes, you get it! That you divine the inner workings of the clearly brilliant mind of John Patrick Shanley and that Wild Mountain Thyme is a clever deconstruction of Irish cinematic tropes that artfully parodies the myths of cute hoors like John Ford and that bloke who made Darby O’Gill and The Little People. Faith and begob, even the maven of make-believe Cecelia Ahern would nod approvingly at how Shanley has managed to gaslight his entire ancestral homeland and is already eyeing future cult classic status for his clever act of calculated whimsy.

There is also a third way of watching Wild Mountain Thyme. Don’t take it seriously and remember that not every Brit is a bumbling, diffident floppy-haired buffoon, not every Yank is an overly polite kinda guy who then turns around and votes for Trump, and not every French person wears striped t-shirts and hates the Brits (not too sure about that one - Ed).

In any case, this is not a terrible film for the reasons you might be expecting it to be a terrible film. It is a terrible film because it is a badly made film that is badly written and badly acted. Quite apart from those accents (and yes, they do indeed meander all over Ireland before falling off the Cliffs of Moher), and the doggerel of the sub-Sean O’Casey script wherein people say things like "what is the sky for?", "I’ve got a tinyness in my head" and "glass tastes like teeth", Shanley has failed to inject any humour, momentum or style into what is essentially a series of gleefully heightened stage Irish cliches and 1950s-themed cultural reductionism.

It is inert, soulless, and everyone talks in riddles like they’ve been hanging out at the local fairy fort a bit too much or they’ve just stepped on a stray sod. Your cliché Bingo card will be a full house after the first twenty minutes.

Jamie Dornan beats fifty shades of green out of the scenery as local dreamer Anthony Reilly, and Emily Blunt gamely tries to channel some Maureen O’Hara as headstrong redhead Rosemary Muldoon. She smokes her dead daddy’s pipe, rides a horse called Blister, and spends most of the movie staring into the middle distance dressed like a Brown Thomas version of Peig Sayers. Meanwhile, Dornan gets to wear a Frank Spencer style raincoat as he goes around prodding the land with a metal detector and talking to donkeys.

Both look like models from a 1986 RTÉ Guide knitting pattern. Both are also eccentrics in a townland teeming with eccentrics (there’s also "Bad News" Cleary and Mary O’Connor with the whistling tooth) but Anthony and Rosemary, well, they are destined to be together since childhood.

Naturally, Anthony, who is tormented by a mysterious family curse, can’t see this because he’s A MAN and naturally there is a contested piece of land, a kind of Danzig corridor between Anthony and Rosemary’s farms which causes no end of consternation to Anthony’s father, Tony. He’s played by Christopher Walken (with a wandering brogue), who is clearly having a hoot as a crotchety old fella, who, like every crotchety old fella in every Irish movie set in the countryside, is obsessed with his and everyone else’s death.

Sadly, Walken doesn't break the fourth wall and do a Pulp Fiction style soliloquy straight to camera about his War of Independence buddy's watch or, even more regrettably, a variation on his morbid Ballardian rambling from Annie Hall.

Anyway, when Tony decides to sell the family farm to his flashy American nephew Adam (Jon Hamm) because Anthony is away with the fairies, things come to a head but rather than introduce any degree of conflict or plot development, Shanley serves up a series of increasingly stupefying scenes of sitcom style slapstick and misunderstandings.

Shot through a shamrock-tinted lens, the rutted boreens and sweeping vistas of Mayo look as good as the lead actors, Hamm escapes with his dignity, and Dearbhla Molloy does bring a bit of class and fun to proceedings as Rosemary’s mother. It is also a lot better than John Michael McDonagh’s leaden redemption parable, Calvary.

All Wild Mountain Thyme is missing is a kindly old priest with a glint in his eye and a bottle of porter secreted under his cassock. Or maybe Trevor Howard’s Father Collins from Ryan’s Daughter to eat this collection of spluttering gobsheens alive. This steaming pile of Blarney can kiss my ass. And my donkey too. 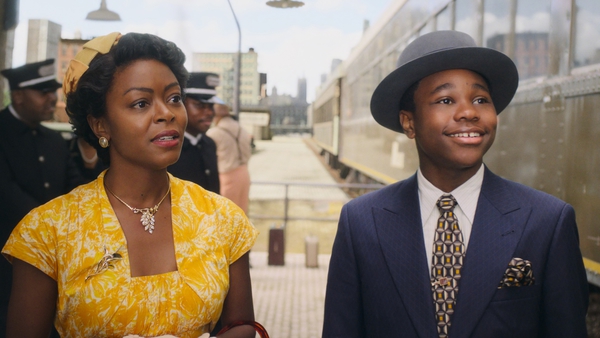