Written and directed by Liam Gavin, A Dark Song is dark enough for a body, so dark that at times it is unbearable to watch. Like, for instance the scene in which a dagger is pulled from a human belly (I am not saying whose so I’m not spoiling.) Or take the scene where the woman of the piece, Sophie (played with requisite chilliness by Catherine Walker) is obliged to drink blood.

The unnamed woman buys an abandoned house and later meets up with an occultist named Joseph (Steve Oram) who is garrulous and grumpy over his egg and chips and speaks in a broad (English) Midlands accent. He is reluctant to accede to Sophie’s wishes, as the rite she is asking him to perform is risky for both body and soul. She is determined to contact her young son who lost his life when some teenagers dabbled in the self-same occult.

Jsoeph agrees to be the medium in the end, draws a trail of what looks like salt around the empty mansion, a line which he says cannot be crossed. The rite may take months, they buy in stocks of food. He goes on about the cleansing the woman must undergo and asks her if she has done certain prior purification which involves not having had sex of any kind for some time beforehand. What wackiness is in store, one muses, settling in one’s seat. 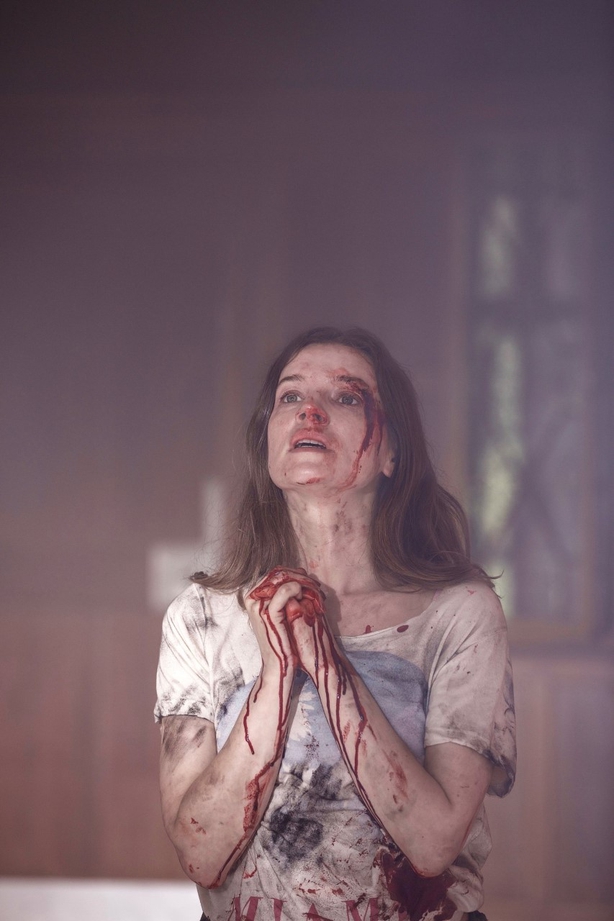 Thus the pair embark on their pitiless task, with enormous obstacles to surmount – chiefly tedium, (for them and us, incidentally). An inordinate amount of candles lights the rather futile journey towards contact with the woman’s son. One of the rites involves Sophie shaving the man’s back, er, twice, no kidding, with a disposable razor. There is an awful lot of gagging and Catherine Walker getting sick in the toilet bowl.

On break periods from their punishing rites, the pair smoke roll-ups, drink coffee and snarl at each other. Or otherwise fling delph and things around, including that dreaded kitchen knife. Meanwhile, they resist intimacy as best they can.

Made with the support of both the Irish Film Board and Ffilm Cymru Wales, the film won two awards at FantasPorto in March of this year and two previous awards at MonsterFest in 2016.

Critically, it appears to be be doing well, in such niche circles, and there may be some kind of late teen audience for this one.

However, its purpose was all rather lost to  your reviewer, who sat mystified and dismayed throughout.