F9: The Fast Saga isn't the only vehicular mayhem on offer this weekend - Liam Neeson's latest action gig sees him screeching onto streaming in The Ice Road. He's up against the most fearsome adversary of the lot - nature - in this race against time from Armageddon and Die Hard with a Vengeance writer Jonathan Hensleigh. Hitting the trouble man trifecta of unshaven, uncompromising and Irish-American, Neeson plays Mike McCann, a trucker who bounces from gig to gig and rig to rig with his PTSD-suffering brother Gurty (Marcus Thomas) in tow. After another job ends with fists flying, Mike and the mechanic are offered a big payday to ferry rescue equipment to a collapsed diamond mine in Northern Canada as part of a convoy involving an equally fiery driver (Amber Midthunder) and a lesser spotted boss (Laurence Fishburne) - the kind who won't ask anyone to do anything that he wouldn't do himself. It's April, the ice roads are starting to thaw and the miners are running out of oxygen. Much as it would like to be, The Ice Road isn't The Wages of Fear, but if hearing Neeson saying "We have only one chance to get out of this and make it right!" and, even better, "Well, now I'm angry!" revs your engine, it will be no chore to tag along for the ride. The depiction of traumatic brain injury is clunkier than anything the motley crew has in the back, but the set-pieces are proper old school and the pacing isn't glacial. As yet another instalment in Neeson's latter-day planes, trains and automobiles odyssey, this is more enjoyable than some of its predecessors. Streaming now on Amazon Prime Video. 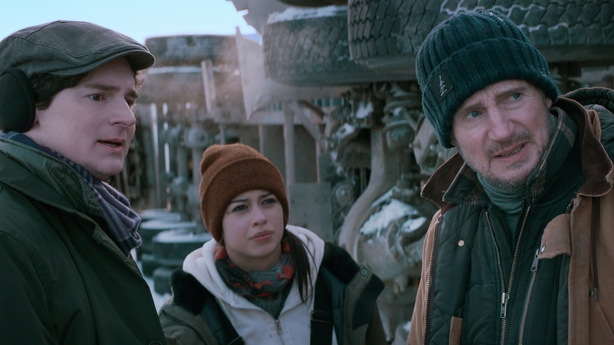 PS: The Ice Road arrives on the heels of this month's biggest Neeson news - that he will next play master sleuth Philip Marlowe in Neil Jordan's adaptation of Benjamin Black/John Banville's The Black-Eyed Blonde. Now, that really is precious cargo.