Drummers Travis Barker, Lars Ulrich and Martin Chambers have been added to the line-up for the Wembley Stadium tribute concert in memory of the late Foo Fighters star Taylor Hawkins.

The trio - from the bands Blink-182, Metallica and The Pretenders respectively - join a star-studded billing that already includes Liam Gallagher, Brian May of Queen, and stand-up Dave Chappelle.

Organisers also announced the show on Saturday, 3 September will be livestreamed on Paramount+.

Directed by Joel Gallen and produced by Emer Patten at EP-PIC Films and Creative, the full show will be available both live and on-demand. 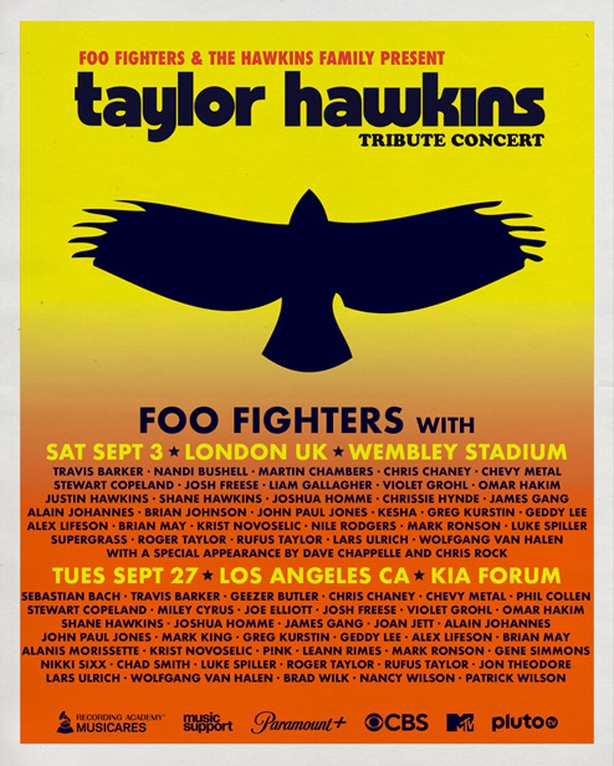 Funds from concerts ticket and merchandise sales will go to the Music Support and MusiCares charities, which were selected by the Hawkins family.

The show is being followed by a second concert on 27 September at the Kia Forum in Los Angeles.

The shows are expected to be the band's first since Hawkins was found dead aged 50 in his hotel room in Colombia in March.

No cause of death was announced, although a preliminary toxicology report showed traces of 10 substances in his body, including opioids and marijuana.

Hawkins had played in the band, fronted by former Nirvana drummer turned lead singer Grohl, for more than two decades.

He joined Foo Fighters in 1997 after previously touring with Alanis Morissette. Hawkins also starred with the band in their recently released film, Studio 666.