Taylor Hawkins, the iconic Foo Fighters drummer, has died, the band has announced.

A cause of death has not been disclosed.

Hawkins had been on tour with the Foo Fighters at the time of his passing. They had been due to play the Estéreo Picnic Festival in Bogotá, Colombia on Friday night.

No further details about Hawkins' death were provided, although local media outlets reported that Hawkins had been suffering from chest pain and an ambulance had been called.

In a statement, the Bogota municipal government said the city's emergency centre received a report of a patient with "chest pain" and sent an ambulance on Friday evening.

They said health workers attempted to revive him which was unsuccessful, and the cause of his death is under investigation.

The band said it was "devastated by the untimely loss" and asked for the privacy of his family to be respected.
The drummer, 50, starred in the world-famous band alongside singer-guitarist Dave Grohl, bassist Nate Mendel, guitarists Pat Smear and Chris Shiflett and keyboardist Rami Jaffee.

"The Foo Fighters family is devastated by the tragic and untimely loss of our beloved Taylor Hawkins," the Foo Fighters' official account tweeted.

"His musical spirit and infectious laughter will live on with all of us forever.

"Our hearts go out to his wife, children and family, and we ask that their privacy be treated with the utmost respect in this unimaginably difficult time."

Tributes have poured in across social media.

The Texas-born, California-raised Hawkins had been a mainstay in the Foo Fighters since 1997, playing on every album from 1999's There Is Nothing Left to Lose to last year's Medicine at Midnight. Hawkins joined the band shortly after the recording of 1997's The Colour and the Shape had been completed.

Born Oliver Taylor Hawkins, he had previously been the drummer in Alanis Morissette's band as she toured her hit album Jagged Little Pill. Earlier in his career, he had been behind the kit for the singer Sass Jordan. 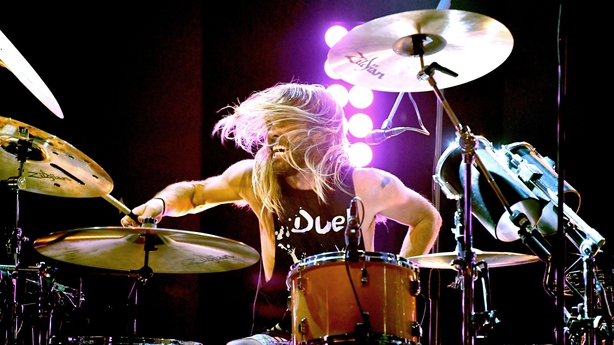 With his powerhouse drumming and talent as a vocalist, Hawkins was seen as a 'second frontman' in the Foo Fighters. He sang lead vocals on the band's tracks Cold Day in the Sun and Sunday Rain and also on numerous cover versions. Away from the Foo Fighters, he had his own group, Taylor Hawkins and the Coattail Riders, making three albums. Their most recent record, Get the Money, was released in 2019.

Hawkins guested with many musicians, including Queen's Brian May and Guns n' Roses' Slash, over the years and recently had teamed up with Jane's Addiction guitarist Dave Navarro and bassist Chris Chaney to form the trio NHC.

Taylor Hawkins is survived by his wife Alison, their three children and his extended family.

Miley Cyrus, who was part of the lineup alongside the Foo Fighters at the Estéreo Picnic festival, said she would dedicate her Saturday show to him.

"My favorite memory of Taylor is dancing round the drum kit while he played this song..." she posted on her Instagram story, with a picture of the Pretenders song Brass In Pocket.

"Playing it on repeat, imagining us laughing forever." 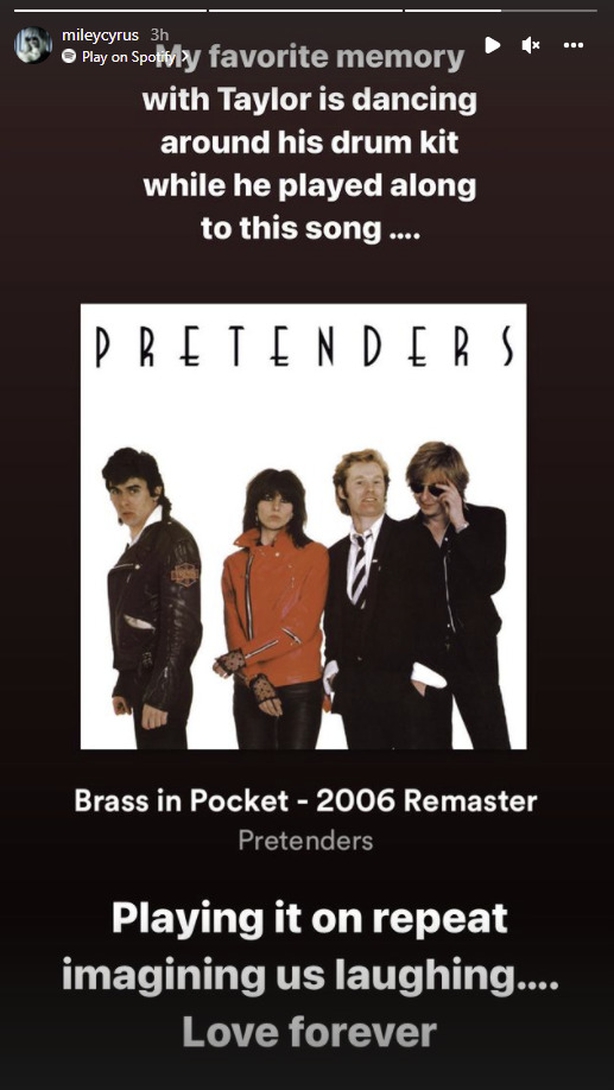 Oscar-nominated producer Finneas O'Connell said "the world was lucky" to have experienced Hawkins' "gifts" before his passing.

"So heartbroken to hear about Taylor Hawkins' passing, what an incredible talent, who didn't also need to be so kind and generous and cool but was all those things too anyway," he said.

"The world was so lucky to have his gifts for the time that it did, Rest In Peace."

Ozzy Osbourne praised Hawkins as a "great person and an amazing musician" and promised to "see him on the other side".