Irish animation Wolfwalkers from Kilkenny's Cartoon Saloon has missed out on the Animated Film BAFTA to Pixar's Soul, while Calm With Horses star Niamh Algar missed out on the Best Supporting Actress gong to Yuh-Jung Youn for her role in Minari.

Algar's co-star Barry Keoghan also lost out to Daniel Kaluuya in the Best Supporting Actor award for this role in Judas and the Black Messiah.

Calm with Horses, which was shot in Galway and Clare and was up for four awards, was also beaten in the nominations for Best British Film to Promising Young Woman, and Best Casting by Rocks.

Fennell joked that everyone made the film for "a packet of crisps" and said the experience was "the greatest thing in my life."

"It was a labour of love". @emeraldfennell thanks the whole crew as she picks up the Outstanding British Film BAFTA for Promising Young Woman (@PromisingFilm) #EEBAFTAs pic.twitter.com/2BS8NDtgBn

A handful of presenters were in attendance at this year's BAFTA ceremony, with winners and nominees accepting their awards virtually.

The ceremony, which was hosted by Edith Bowman and Dermot O’Leary,  followed on from Saturday night’s ceremony – which saw behind-the-camera categories, including casting and make-up, winners announced.

Britain's Duke of Cambridge, who is the current president of BAFTA, was to feature virtually in this year’s awards, but pulled out following the death of his grandfather, the Duke of Edinburgh, on Friday.

TV presenters Bowman and O'Leary paid tribute to Britain's Prince Philip following his death aged 99, with Bowman saying Philip "occupies a special place in Bafta history and our thoughts are with the royal family".

The first award of the night in the Animated Film category went to Soul, with Wolfwalkers, from Kilkenny's Cartoon Saloon missing out on the prize.

The first award of the night is the BAFTA for Animated Film. And the winner is the sweet sounding Soul! #EEBAFTAs pic.twitter.com/ICjavg7fqg

The Father, which puts you in the confused head of a man with dementia, played by Anthony Hopkins, won the Adapted Screenplay award.

Immersing us into one man's personal battle with dementia, The Father wins the Adapted Screenplay award at the #EEBAFTAs pic.twitter.com/IZSPYjwJdF

Winner of the Cinematography BAFTA went to the visually stunning Nomadland. The movie alongside Rocks led the nominations with seven nods each. 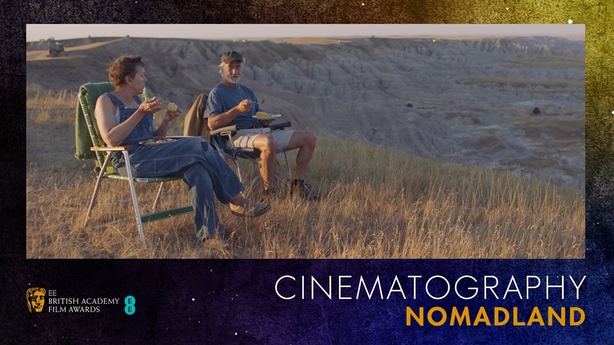 Accepting the award virtually, the Korean actress said she was "very honoured" to win, and also sent her "deepest condolences" on the death of the Duke of Edinburgh.

Congratulations to Yuh-Jung Youn, winner of the Supporting Actress BAFTA for her role as spirited grandmother Soonja in Minari. #EEBAFTAs pic.twitter.com/PQ4tWcAZeD

Winner of the Supporting Actor BAFTA is Daniel Kaluuya for his charismatic portrayal of Black Panther leader Fred Hampton, in Judas and the Black Messiah. #EEBAFTAs pic.twitter.com/y8robqQBmD

Nomadland filmmaker Chloe Zhao made history as only the second woman to win the Best Director BAFTA.

The movie stars Frances McDormand as a 60-something woman who lives life on the road in the American West.

Congratulations to Chloé Zhao, who wins the Director BAFTA for her brilliant and strikingly real portrayal of the itinerant worker community in the USA. #EEBAFTAs pic.twitter.com/M3kknc59y2

Anthony Hopkins was named the winner of the leading actor BAFTA for his role in The Father. The film's director, Florian Zeller, accepted the award virtually on his behalf.

Congratulations to @AnthonyHopkins who wins the Leading Actor BAFTA for his heartbreaking performance in The Father #EEBAFTAs pic.twitter.com/RBNeP7Xrj2

The Leading Actress BAFTA went to Frances McDormand for her performance as the kind, resourceful Fern in the brilliant Nomadland.

Frances McDormand does it again as she wins the BAFTA for Leading Actress for her performance in @Nomadlandfilm 🏆 #EEBAFTAs @EE pic.twitter.com/H2AHGfs6FI

The final award of the night went to Nomadland in the coveted Best Film category, making it the movie's fourth win at the awards ceremony.

And finally, the one we've all been waiting for, the winner of Best Film at this year’s #EEBAFTAs is … Nomadland, taking its fourth BAFTA of the evening! pic.twitter.com/3IAJPSEmJP

Check out all of the winners from Sunday's BAFTAs here