U2 has teamed up with YouTube to present a series of the band's classic gigs with enhanced visuals and remastered, audio along with new opening act performances from Dermot Kennedy and Fontaines D.C..

U2: The Virtual Road will air on the band’s YouTube channel starting on St. Patrick’s Day with revamped versions of their shows at Red Rocks, Colorado in 1983, Slane Castle in 2001, Mexico City in 1997, and Paris, 2015.

The four concerts will be broadcast for 48 hours only and mark the first time that three of the concerts - Slane, Red Rocks and Mexico - have been made available digitally. 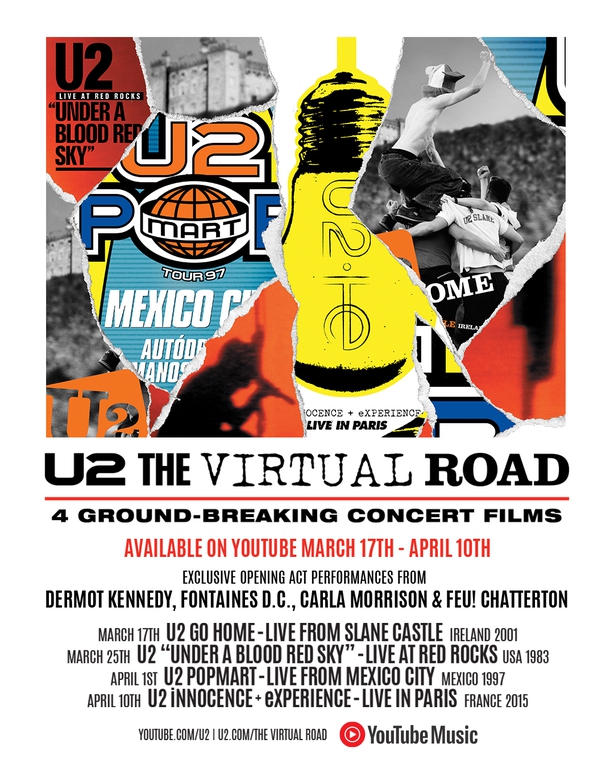 The first concert, U2 Go Home: Live From Slane Castle, will broadcast on St. Patrick’s Day and was the band’s return to the legendary Irish concert site on September 1, 2001, for their first performance on the banks of the River Boyne in over twenty years.

Dermot Kennedy will open the show with a solo performance recorded last week outside in Los Angeles.

On March 25, U2: Live at Red Rocks, which was recorded on June 5, 1983, at Red Rocks Amphitheatre in Colorado, United States on the band’s War Tour, will air.

Regarded as a career-defining show, parts of the rain-soaked performance at the outdoor venue were used on the live album Under a Blood Red Sky. Another Grammy-nominated Irish band, Fontaines D.C., will open the show with a performance recorded last year.

The PopMart Tour visited Mexico City in December 1997 for a show at the Foro Sol Stadium and the gig will be aired on YouTube on April 1.

In December 2015, U2 returned to Paris less than a month after the November 13 terrorist attacks on the city for two rescheduled shows. iNNOCENCE + eXPERIENCE: Live in Paris marked the final performance on the tour.

On April 10, YouTube will broadcast the show for the very first time, with French band Feu! Chatterton as support.

In a statement, U2 said, "Every show is memorable for us but these four particularly so. It's exciting to be on the road again.

"Embracing all the wonder of the virtual road a nd especially exciting to be joined by such a brilliant line-up of fellow travellers in Dermot Kennedy, Fontaines D.C., Carla Morrison and Feu! Chatterton."

U2’s most recent album, Songs of Experience, was released in December 2017 and was followed by the eXPERIENCE + iNNOCENCE Tour in 2018.

In 2017, U2 toured the world to mark the thirtieth anniversary of the landmark Joshua Tree album, including their homecoming show at Croke Park.

In June last year, SiriusXM and U2 announced the launch of U2 X-Radio, a new digital station with 24-hour broadcasts of the band’s music, as well as features and interviews hosted by presenters including Lyric FM’s John Kelly, former Pogues bassist Cait O’Riordan, and RTÉ 2fm’s Dan Hegarty.