Caroline Flack's boyfriend has come to the defence of the Love Island host and insists that she's become the victim of a "witch hunt" following her arrest.

The 40-year-old was charged on Friday with assault following a private domestic incident involving a man.

In a message posted to his Instagram Stories on Monday, her partner, 27-year-old Lewis Burton, said "lies and abuse" had been aimed at Flack, and also denied he had signed a non-disclosure agreement (NDA) relating to their relationship.

He wrote: "I'm tired of the lies and abuse aimed at my girlfriend. This is not a witch hunt this is someone's life.

"I have not signed any NDA. Why would I? Caroline is the most lovely girl. Loyal and kind. She doesn't deserve any of this."

The couple have been dating since earlier this year after being introduced by mutual friends and made their relationship official in August. 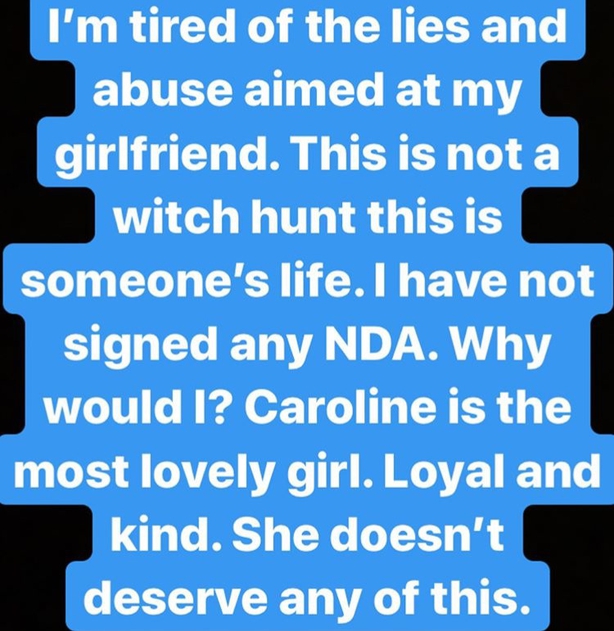 The Metropolitan Police said on Friday that Flack had been charged with assault by beating and although they did not name the man in question they said he was not seriously injured.

"She is co-operating with the appropriate people to resolve matters. We will not be making any further comment for legal reasons."

Flack will appear on bail at Highbury Corner Magistrates' Court on December 23.

The arrest came days before the presenter was due to fly out to South Africa for the upcoming winter Love Island series, which is kicking off on 8 January, 2020.

Flack is known for hosting TV programmes including The X Factor, The Xtra Factor and I'm A Celebrity... Get Me Out Of Here!'s spin-off show.

In 2014 she won Strictly Come Dancing and since 2015 she has hosted ITV2 reality show Love Island and its accompanying programme Aftersun.