Game of Thrones author George R. R. Martin has received the International Recognition Award as part of this year's Irish Book Awards during a special ceremony in Dublin on Tuesday evening in which he warned of the "perilous times" we live in and the importance of paying attention to history.

The celebrated writer received the accolade at an event in the historic GPO on Dublin's O'Connell Street on Tuesday ahead of the 2019 awards on November 20 in Dublin's Convention Centre.

Accepting the accolade, the American author said: "Thank you. It's quite a thrill for me to be here and to accept this award.

"I’ve been told a little about it and some of the previous winners of it and I always think that people who have gotten an award, the company you keep is always a very important part, so I’m thrilled to have been included in this company and to receive it in this place, the Irish Alamo.

"My latest book Fire and Blood is a work of imaginary history and A Song of Ice and Fire is a work of fiction, fantasy novels, which I will finish," he said to laughs from the audience. "I know I should be at home writing right now, I’m sorry! It is based on history, the 100 Years War, the Crusades, a whole lot of things from medieval history which I’ve read over the years."

"We’re living in perilous times folks, in the United States and over in England where I was and I’m sure it’s affecting every part of the world. Nothing is ever truer than those who do not know real history are doomed to repeat it."

He concluded his speech by saying: "I sometimes wake up at night wondering what precise history we’re about to repeat. Being in this building, infused with its enormous sense of history and knowing the men who fought here and the men who died here in the names of having the right to govern themselves and the right to freedom is a very moving experience.

"So thank you so much for bringing me here to this place and for giving me this award. It means a lot." 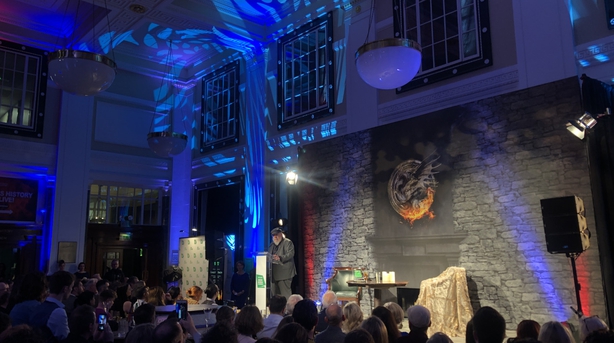 During a Q&A following his speech, Martin spoke about his inspiration behind his A Song of Fire and Ice fantasy series and admitted the story "came out of nowhere".

The writer then made the revelation that the fictional continent Westeros is based on the shape of the island of Ireland.

He said of the process of creating the intricate world in the books: "Initially I followed the characters but a certain point I said 'I've got to draw a map’ and that’s when I turned Ireland upside down."

Explaining further he said: "I needed a map, I had a piece of blank paper, what should this Westeros place look like? I didn’t want it to look like Middle Earth, or anything recognizable, but I wanted it to have a distinctive shape.

"I used two pieces of paper, because I had a line in there already that the North is as big as all of the six lower kingdoms combined, so I had one sheet for the North and one for the South.

"So I used upside down Ireland for the South [Westeros], at least as the basis."

The International Recognition Award was bestowed on the 70-year-old author in recognition of his significant contribution to fantasy and science fiction over the last four decades.

The first of his epic fantasy novels A Game of Thrones was published in 1996, kicking off the A Song of Ice and Fire series. The series has gone on to become a global publishing phenomenon, with worldwide sales exceeding 90 million copies.

The books were adapted by HBO into the mega-hit TV series Game of Thrones, which concluded its eight series run in May to mixed reviews.

Martin is currently working on The Winds of Winter, the sixth and penultimate book in his Ice and Fire series, while the seventh, A Dream of Spring has yet to be written.

The shortlist of nominations for the Irish Book Awards 2019 will be announced on 24 October.