Following his death aged 85, we have rounded up some of Gay Byrne's finest moments on The Late Late Show from over the years.

Boyzone's first ever public appearance has gone down in TV history and it's not hard to see why. The segment opens hilariously as a very excited looking Gaybo says the "macho men have come to town" while flanked by a bare-chested Shane Lynch and Keith Duffy decked out in dungarees and braces.

After describing a Take That concert in The Point, Gay bluntly says "these lads have decided to cash in on that particular market", and goes on to grill them about their musical prowess.

However, when an audience member says they're "more like the Chippendales", Gay is more forgiving, saying: "Listen, what do you expect, they're only starting."

His last words to the lads proved to be fortuitous: "We look forward to hearing from you when you're famous."

Famed Scottish psychiatrist and writer RD Laing appeared on The Late Late Show in 1985 and it's safe to say Gay wasn't too impressed. Laing, who was widely regarded as one of the foremost thinkers of his time on the topic of mental illness, was accused by Gay of being "slow" and appearing "under the weather" during the interview.

Laing admitted to having "a couple of half pints of Guinness in the course of the day", and the presenter said it wasn't ok because "it is perfectly obvious to people that you are under the weather and you are slow".

When Gay began to say it was an "unwritten rule for anybody who is going to appear on television" not to have a drink, the audience became outraged.

"That's your rule," multiple people from the audience piped up.

In scenes that are hard to imagine in today's TV landscape, all hell breaks loose, but Gay takes it all in his stride.

Bumbling waiter Manuel from the much-loved BBC sitcom Fawlty Towers, played by the brilliant actor Andrew Sachs, made a very memorable appearance on The Late Late Show, and Gay proved he had some acting chops too.

"Can I have a glass of water?" Gay asks, before Manuel strides out onto the stage with a jug on a tray. He pushes an outraged looking Gay out of the way to bow in front of the clapping audience.

"Excuse me, who are you exactly?" Gay demands to know.

"It's not for you senor, it's only important people, no rubbish people here today please," Manuel tells him, before asking the audience: "I look for Senor Byrne - he want a drink."

"You're disrupting the show!" Gay yells at him, the perfect picture of indignation.

"I'm sorry I don't like to do this in front of so many people," Manuel says. "I hope nobody else is watching."

Gay then breaks character when it appears Manuel has an extra trick up his sleeve, saying with a cheeky smile: "Watch yourself, just watch yourself, this is not what we agreed to!"

Eamonn Andrews surprises Gay
In 1979, after 'only' 500 episodes of The Late Late, the tables - or rather chairs - were turned on Gay. Thinking he was about to greet American star Dana Andrews, Gay was instead presented with This Is Your Life host Eamonn Andrews, who congratulated Gay on reaching that milestone, and wasted no time in letting his old friend know that he'd been set up by the rest of the Late Late team!

This was water cooler telly before we had water coolers as a man who was rarely lost for words suddenly found himself scrambling for things to say. "Will you sit down in the other chair and let me talk to you about you?" asked Eamonn as Gay tried to make sense of it all.

Composure somewhat returned, Gay reflected on his 17 screen years in the homes of Ireland. "Seventeen years ago, I think we realised we would never have a neverending supply of personalities and celebrities and film people and so on," he said. "And we started making excursions into current affairs and politics and matters of controversial interest and so on. And I think now we've reached a stage where the programme continues to be 'formatless' down through the years. And I'd like to continue it in that way. The programme hasn't changed; I think the important thing is to keep it different, on the hop most weeks."

"Do you think that's one of the reasons it is so popular?" asked Eamonn.

"I think so," replied Gay. "I think that one of the reasons is that it's live and people like the feeling that it is live and it's here in Studio One here in Montrose every Saturday night and that anything can happen. And they're prepared to accept it live, warts and all, even the things that go wrong - tonight!"

It was all right on the night.

Tom Waits finds The Heart of Saturday Night in Studio One
What's rare is wonderful, and Tom Waits' only Irish television appearance to date was on The Late Late Show back in February 1981, when he made it to Studio One by the skin of his teeth. Cradling the phone, Gay said: "That's alright. No, he's here, he's here.  He's just walking in now. That's alright. I'll introduce him now."

Turns out Gay had been to see the "fabulous performer" in the Olympia the previous year and told the Late Late audience: "I'd heard about the guy that was performing there that night but I'd never seen him in person. And I found the Olympia packed to capacity with absolutely adoring fans." There were a fair few more after Waits finished On the Nickel.

When the music stopped, Gay sidled up to the grand piano to find out more about one of his most enigmatic guests. "You got a nice little set up here, don't ya Gay?" said Tom between drags. "Not a bad little set up," replied Gay. "I notice that when you're onstage you bring relaxation to a fine art. You don't go in very much for production and bright lights and everything: you just sit down and get on with it." "Well, you do the same thing here on your programme, I guess," said Tom. Touché!

Watching on from the audience was Tom's wife, Kathleen Brennan, who showed they were two of a kind when it came to having fun with interviewers. "And how did you meet this guy?" wondered Gay. "Accidentally," she said. "Actually, I was a nun and he fell asleep in the church and I woke him up!"

U2 and the Harley
Love came to town in vehicular fashion on Gay's final Late Late on May 21, 1999 when U2's Bono and Larry Mullen, Jnr rode into Studio One on a Harley-Davidson - and gave Gay one of the shocks of his 37 years hosting the show.

"Do you remember about three or four years ago at Sutton Cross?" asked Larry. "I was there; I was on my Harley... And this car pulled up beside me - it was a very battered Limousine! The window went down and you stuck your head out and you said, 'Excuse me, what sort of a bike is that?' I turned around and I saw you and I said, 'It's a motorbike, Gay!' And you said, 'I love those bikes'. So Gay, this is from us, to you, as a gift."

Gay couldn't believe it - "Come on! For God's sake, don't be ridiculous!" - and still couldn't believe it when trying the bike for size. "If you don't want it I'll take it!" shouted one wag off-camera. "Well there isn't one for everyone in the audience!" said Bono. "This belongs to Gay." Just like the night itself.

The man of the moment and his guests then went over some ancient U2 history, including Bono making a hames of going out to Gay's house in bid to get U2 on the Late Late - he didn't even knock on the door! "If I'd known you were going to give me a Harley-Davidson I would've come to the door!" said Gay.

The laughs didn't end there. "You're going to sing for us," said Gay. "I wasn't planning on singing," said Bono. "I thought the bike would be enough!" Put on the spot, and thinking on his feet, Bono then led the Late Late audience in an a cappella version of the show's theme tune.

Professional hell-raisers Zig & Zag were being interviewed by Gay on The Late Late Toy Show in 1992 when their furry friend Dustin pops up. The ever-authoritative Gay handled them with ease.

"I don't believe this is happening," Gay says when Dustin rears his head, before telling the applauding audience "not to encourage them".

"Did they have nothing left in wardrobe except for that jumper?" Dustin quips about Gay's Christmas jumper.

The lads then chase Gay around the studio with a remote control car. What could be utterly cringeworthy at the hands of another broadcaster, works brilliantly with Gay in control as he plays up his cantankerous side.

The Bishop and the nightie (1966)
Fire up the time machine. You may have heard the above phrase, but what were the ructions of 53 years ago actually about? Well...

The Late Late Show was doing a quiz and Gay picked a married couple, Richard and Eileen Fox, from the audience and asked each of them a series of questions while the other was out of earshot. One of the questions was about the colour of Eileen's nightie on honeymoon. Richard said it was transparent; Eileen said she wasn't wearing any. Minds exploded nationwide.

Not seeing the fun side of Year Zero for modern Ireland was Thomas Ryan, Bishop of Clonfert in Galway, who denounced The Late Late Show from the pulpit. Gay later issued a statement, saying no embarrassment was intended and that The Late Late was a late-night show for adults. The video of the night in question wasn't kept, but have a listen to the audio.

The night the cake went on fire
Back in 1981, the Late Late's behind-the-scenes stalwart Pan Collins was in the guest's seat to talk about her book, It Started on The Late Late Show. Having worked as a researcher on the programme since it started, Pan had a few stories to tell. This was one of the best.

Pan told Gay that the show she most enjoyed working on was the 70th birthday tribute to Micheál Mac Liammóir in 1969. But it didn't pass off without incident...

"The cake went on fire," Pan told Gay matter-of-factly. "You asked me to await a certain cue and be ready to light the 70 candles on the cake on cue, which I did," Pan recounted. "And the candles lit up beautifully, we were standing right under the air conditioning and I was to push on the cake.

"But before I could do a thing Siobhán McKenna sprang out of the audience with a great sheaf of flowers and started to address Micheál with a long speech in Irish. I was trapped! And the air conditioning was blowing a gale! And it blew the flame of the candles back onto... there was a little decoration of horseshoe and white heather on the top of the cake and all the candle flames blew back onto that. And it went up! Eventually Siobhán sat down and I rushed onto the set shouting to you, 'Gay quick! The bloody cake's on fire!'"

With that, Gay showed the clip, adding: "That's the only barbecued birthday cake you're likely to see!" 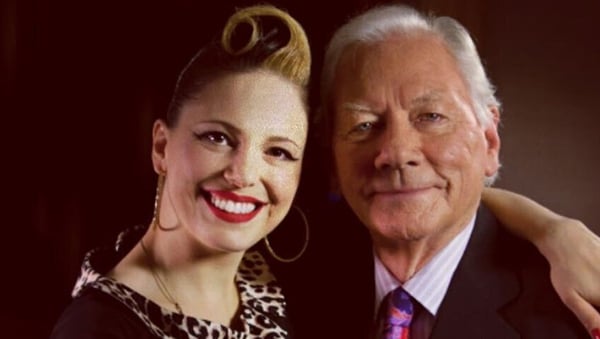