The stars of hit comedy series The Derry Girls walked the red carpet at Thursday night's IFTA Gala Television Awards and said it was "so nice to all be back together again".

The cast got lots of attention as they arrived at the IFTAs ceremony at the RDS.

"It's been so nice," Leah O'Rourke, who plays Jenny, told RTÉ Entertainment. "Even walking here, people were snapping away and telling us congratulations, so we're delighted with it!"

"It's so nice all to be back together again," Saoirse Monica Jackson, who was nominated for the Best Actress award for her portrayal of central character Erin, said. "It's such an honour to be here and just celebrate all the great work that we have coming out of here. My fellow nominees are all absolutely brilliant so it's great."

The show, which follows the trials and tribulations of teenager Erin growing up in 1990s Northern Ireland, was commissioned for a second run after just one episode due to its instant popularity.

"We're blown away, but it's all in the writing," Louisa Harland, who plays Orla, said. "It's all Lisa McGee."

The cast said they were in the dark about McGee's ideas for the second season. "We can't say anything!" Kathy Kiera Clarke, aka Aunt Sarah, said.

"She's giving absolutely nothing away," agreed Jamie-Lee O'Donnell, who plays the feisty Michelle. "So we're going to wait until she has a few drinks and then we're going to ask her again."

O'Donnell added that they're "up for anything".

"Well there's so many possibilities so we're sort of up for anything, really. We trust Lisa completely, and Liz [Lewin, executive producer], so fingers crossed it goes really well."

Many of the red carpet attendees were effusive in their praise of Derry Girls, with Jennifer Barry of The Young Offenders saying: "The Derry Girls hugged us when we walked in, it was crazy! I was like 'I love you so much!'"

English actress Jorgie Porter is also a huge fan, saying: "Oh my God, Derry Girls is hilarious. I feel like they're what we were as kids and when they talk about things you go, 'That's what we were saying!'"

Dylan Llewellyn, who plays the tormented James on the show, was delighted to hear that his former Hollyoaks co-star Porter was complimenting the show.

"I know Jorgie as well, she's a legend!"

Check out all the winners from the 2018 IFTA Gala Television Awards here and see the red carpet style here. 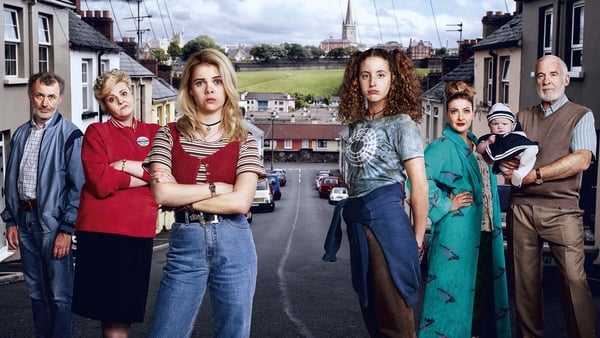