Tonight's Saturday Night Takeaway is the first time Declan Donnelly has appeared on TV without close pal Ant McPartlin since Byker Grove in 1989 and the presenter quipped: "I've got twice the amount of work to do."

"Thank you very much," he declared to warm applause as the show got under way. "Thank you for that very warm welcome, I really appreciate it.

"We've got a jam-packed show this evening, and I've got twice the amount of work to do. So, we're going to crack on…"

On Friday, Donnelly revealed on Twitter that he had been rehearsing solo for the hugely popular ITV vehicle.

"Back in studio today preparing your #SaturdayNightTakeaway for tomorrow night. Have a great Good Friday! D x."

The 42-year-old presenter will also host next week’s episode, the final one in the current series, from Florida. Although McPartlin has retreated from TV, he will feature in tonight's penultimate episode and in next week's final programme as ITV has decided the pre-recorded segments should be aired. 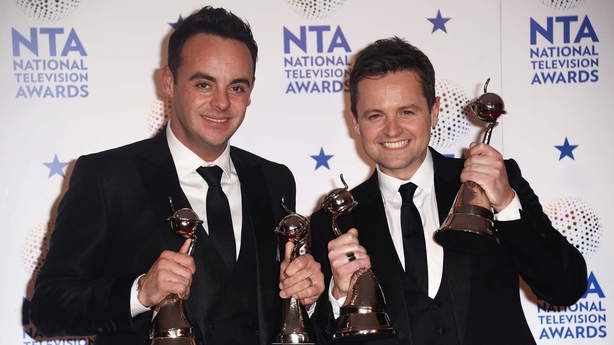 McPartlin has been charged with drink driving following a traffic collision on Sunday March 18. Britain’s Got Talent judge Amanda Holden has sent a message of support to Dec, tweeting ahead of the show: "Sending our love tonight #GoDec @antanddec @itvtakeaway."

A forthcoming TV show filmed in Ireland featuring Ant and Dec is reported to have been put on hold as it features the duo drinking alcohol.

The show, Ant and Dec's DNA Journey, is similar in premise to the BBC series Who Do You Think You Are?

Both presenters have Irish roots and they were in Ireland last year to trace their ancestry, visiting Carrick-on-Shannon, Drumshanbo and Drumkeerin.