Dancing with the Stars is going all Hollywood this weekend as the couples take to the floor for Movie Night.

The songs and dances for this weekend's show were revealed on Can't Stop Dancing on RTÉ2 on Thursday night.

Having topped the leaderboard last week, Alannah Beirne and her professional partner Vitali Kozmin will dance the American Smooth to City of Stars from La La Land.

Anna Geary and her partner Kai Widdrington have been tasked with dancing a contemporary routine to Let It Go from Frozen.

After surprising the judges last week, Bernard O'Shea will be going all Captain Jack Sparrow as he dances the Paso Doble with Valeria Milova to He's a Pirate from Pirates of the Caribbean.

For Deirdre O'Kane and John Nolan, this weekend's dance is the Quickstep to Peppy and George from The Artist.

Jake Carter and Karen Byrne will Cha Cha Cha to The Power of Love from Back to the Future.

Maïa Dunphy and Robert Rowiński will Rumba to Up Where We Belong from An Officer and a Gentleman.

Bottom of last week's leaderboard, Marty Morrissey and partner Ksenia Zsikhotska will be hoping for better scores from the judges when they dance the American Smooth to Pretty Irish Girl from Darby O'Gill and the Little People.

Sambaing this weekend will be Rob Heffernan and Emily Barker to Jump in Line from Beetlejuice.

Find out who makes it through to week five on Dancing with the Stars, Sunday, 6.30pm, RTÉ One. 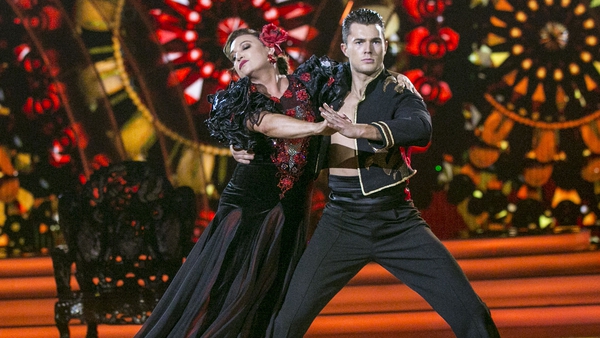 Norah Casey first off Dancing with the Stars