Matt Damon has been roundly criticised on Twitter for "tone deaf" comments he made regarding the sexual abuse scandal in Hollywood.

The actor initially came under fire for remarks made in an interview with ABC News in which he said that not all men who have been accused of misconduct should be tarred with the same brush.

In his new comments, Damon says that men who are not sexual predators are not being talked about enough.

"We're in this watershed moment, and it's great, but I think one thing that's not being talked about is there are a whole s***load of guys - the preponderance of men I've worked with - who don't do this kind of thing and whose lives aren't going to be affected," Damon told Business Insider while promoting his new film Downsizing.

"If I have to sign a sexual-harassment thing, I don't care, I'll sign it," he added. "I would have signed it before. I don't do that, and most of the people I know don't do that."

A number of high-profile Hollywood stars have taken to Twitter to air their opinions on Damon's comments including Rose McGowan, one of the many women accusing Harvey Weinstein of sexual misconduct, writing: "Matt Damon is dense AF".

Singer and actress Cher said: "Matt Damon proving, once again, that nothing is more fragile than masculinity."

She added: "BTW, one should not need or require applause for being a decent human being and not harassing or assaulting others, Matt Damon."

Matt Damon proving, once again, that nothing is more fragile than masculinity. https://t.co/8VtCAjzUVr

BTW, one should not need or require applause for being a decent human being and not harassing or assaulting others, Matt Damon. https://t.co/ut8GGcadac

Will and Grace actress Debra Messing tweeted: "Matt Damon - SERIOUSLY? You are a smart man. A privileged, white man. This is NOT the time to ask for a pat on the back. How about we NOT celebrate men who are simply decent human beings.

Matt Damon- SERIOUSLY? You are a smart man. A privileged, white man. This is NOT the time to ask for a pat on the back. How about we NOT celebrate men who are simply decent human beings. Stay on track, Matt. It’s not about you. https://t.co/mmdbqAUyP7

In an interview with ABC News last week, Damon said that not all men in the film industry accused of sexual misconduct should be tarred with the same brush.

"I do believe that there's a spectrum of behaviour and we're going to have to figure, you know, there's a difference between patting someone on the butt and rape or child molestation," he said.

"Both of those behaviours need to be confronted and eradicated without question, but they shouldn't be conflated."

Damon added: "I would like to point out that, even though it feels like there's this avalanche of men, how many people in the movie business have taken a tumble now?

"Think of how many men are in the movie business... this is like 1% of the guys, It's not everybody, it just feels like it."

Take a look at some more reaction to Damon's comments below.

Me: Oh my god, someone broke all of my dishes!
Matt Damon, crashing thru door: You should talk about people who don't break dishes.

imagine being Matt Damon and thinking "I should keep talking" https://t.co/lSEIyDsvE4

Hi ladies, can we all just be quiet for second and stop chatting about our #metoo stories. Matt Damon wants us so to thank all the men who haven't assaulted us for not assaulting us. pic.twitter.com/wlN1SNsXQq

Without missing a beat, my husband said, "You should be talking about all the movies that don't look stupid, babe."

"So in this film you play a man stuck on Mars who is trying to get home"
Matt Damon: "What about we focus on the people that aren't stuck on Mars"
"what"
"what"

Someone needs to tell Matt Damon to stop talking immediately.

(Matt Damon bursts into trial for serial killer)
"Why are we wasting time on this when we should be talking about all the men who AREN’T serial killers!"

matt damon: THERE ARE MEN IN HOLLYWOOD WHO DONT HARASS.
women: ok...did they help women who were harassed? did they try to stop the men who do or speak about them? did they support anyone at all?
matt damon: THEY DIDNT HARASS BRO CANT U HEAR ME. 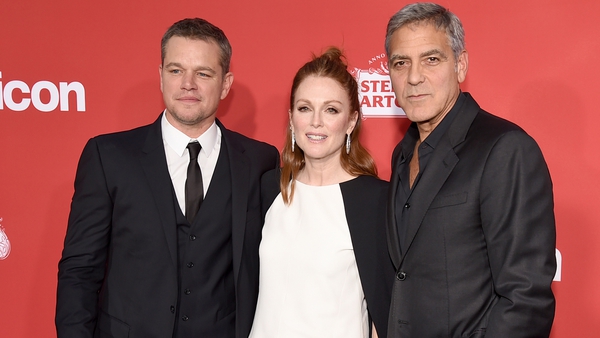