Hollywood stars Mark Wahlberg, Will Ferrell, Mel Gibson and John Lithgow will be chatting about their new movie Daddy's Home 2 on this week's Late Late Show.

The cast, who were in Dublin over the past few days to promote the sequel to 2015's comedy, will be opening up on working together and that hilarious (and very Irish) immersions scene in the movie.

Gibson will also be chatting about his friendship with President Michael D Higgins, filming Braveheart in Ireland and his connection to Longford.

Wahlberg discusses why nothing in life prepares you for being the father of a teenage daughter, losing money to P Diddy on the McGregor/Mayweather fight and meeting the Pope.

Ferrell, another son of ‘The O’Farrell County’, engages in a 'Longford-off' with Gibson and admits to being the most embarrassing Dad on stage, while Lithgow chats about his award-winning role as Winston Churchill in The Crown.

All four stars also addressed the ongoing fallout from the allegations against Harvey Weinstein, Kevin Spacey and others in Hollywood. 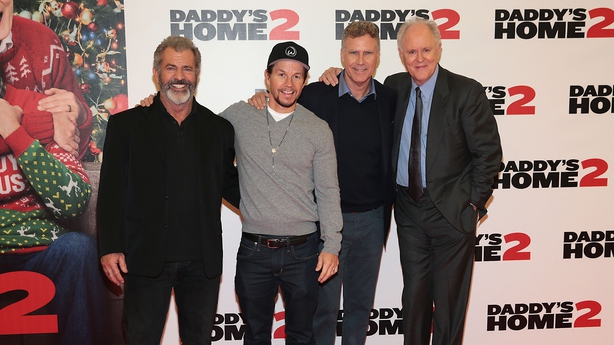