There has been an outpouring of love from viewers for Bryan Dobson after he presented RTÉ News' Six One for the final time.

A "legend", "pure class" and "an absolute pro" are just some of the compliments that have been paid to Bryan Dobson, who signed-off from RTÉ News: Six One for the final time on Wednesday (October 25), on social media. The broadcaster is moving to Morning Ireland on RTÉ Radio One from November 1.

Viewers have taken to social media to share their love and gratitude for Dobson.

Had the pleasure of meeting #Dobbo during my first week in college years ago. A quiet, gentle, unassuming, helpful giant of a man

Thank you for 21 years of @rtenews @bryansixone See you on the ?? #dobbo pic.twitter.com/vvGM5Qezqj

"Thank you for watching" - I look forward to listening to @bryansixone on @morningireland soon. #Dobbo pic.twitter.com/qVSl0gTeu6

On Facebook Orlaith Monks described Dobson as a "class act" while Catriona Hegarty said he would "be missed by the whole country". 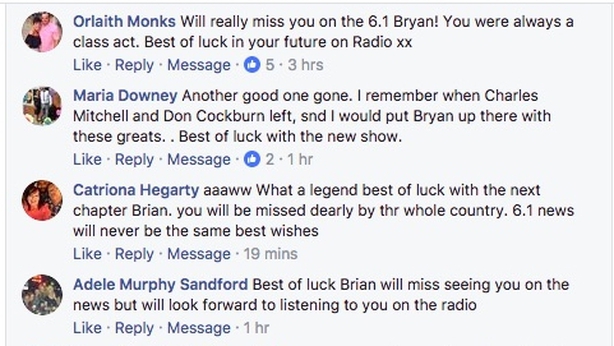 Just as Wednesday’s Six-One bulletin was coming to a close Dobson was surprised by his long-time co-presenter Sharon Ní Bheoláin, who introduced a montage of his "best bits".

The clip featured a glimpse at what goes on behind-the-scenes of the Six One and also showed Dobson reporting on several significant world moments such as Barack Obama's election as the first African-American president of the United States and the 9/11 terrorist attacks.

Bryan Dobson is finished on RTE news and I cried

The six one news will never be the same without Bryan Dobson, all the best with morning Ireland

Hard to imagine Six One without this pair together. Been an institution for as long as I can remember. So long #BryanDobson https://t.co/uBrNRUWyGt

Closer to home the montage showed Dobson reporting on President Michael D. Higgins' state visit to the United Kingdom and asking our politicians some tough questions.

After the compilation aired, Dobson said: "I'm completely taken by surprise. Firstly Sharon, thank you for your very kind words and [it's been] wonderful working with you… and everybody who's been on the programme now and over the years.

An emotional farewell to @bryansixone from Sharon Ní Bheolain on @rtenews with some lovely memorable clips. Good Luck on @morningireland

Sharon Ní Bheoláin saying goodbye to Bryan Dobson on the Six One was traumatising! ??????

He added: "It's been a blast, really has been fantastic. I'm looking forward to pastures new so I'll be on the radio on Morning Ireland from Wednesday of next week. So, as they say, I hate to go, but I'm afraid I have to leave.

"So thank you, and good night."

"I'll see you tomorrow," said Ní Bheoláin to Six-One viewers as the credits started to roll. 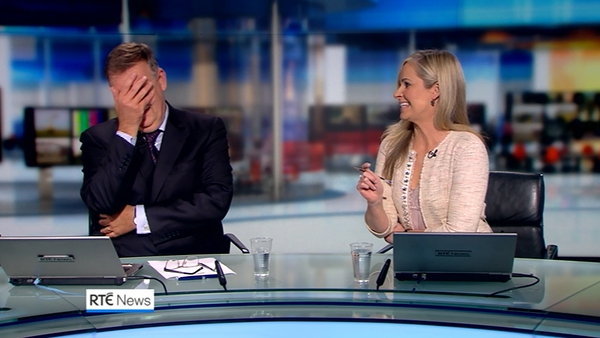