Irish singer-songwriter Caroline Kay has shared her surprise and delight at seeing her debut EP shoot to the top of the Irish iTunes album chart, saying it feels 'insane' to have surpassed Arcade Fire and Ed Sheeran on the list.

Kay released her debut EP Notes on Tuesday and is currently at the top of the Irish iTunes album chart, ahead of Arcade Fire's new release Everything Now, Ed Sheeran's hugely successful ÷ and The Coronas' Trust the Wire.

On seeing her name ahead of established artists, Kay labelled the whole situation as 'bizarre'.

"That is insane. That's insane. There's another list as well, the song list, where the songs are individually placed in the Irish charts and one of my songs, I think it's Can't Get My Love, which is track one, is like two above Harry Styles – I'm like, how is that even a thing? It's bizarre. It's so amazing and so weird," she added.

Kay said she had "a little bit of nerves" ahead of releasing Notes and while she expected "people who kind of know me" to download it, she never thought it would take off in the way it has.

"What I think is so surprising and so amazing is that people who I have never met, who I don't know personally, are supporting me and enjoying the music... I'm just very grateful that people are being as supportive as they are," she said.

While her placing on the Irish iTunes album chart feels "incredible", Kay described her success on the UK singer-songwriter chart as "ridiculous",

"I think one of the most exciting things was, and of course it's incredible to be number one in the Irish album iTunes chart, but last night the studio that I recorded with, they sent me a message to say that in the UK iTunes chart I was number nine on the singer-songwriter UK chart, and I was actually able to follow that and I'm now at number two," Kay said.

"I passed Ed Sheeran on it, in the UK, like! Ireland is incredible but it is a small island, so to be number two in the singer-songwriter [iTunes chart] in the UK and to have actually surpassed Ed Sheeran is ridiculous."

Kay's friends and family have been sharing their support too in wake of her overnight success.

"Everybody is getting in touch and being so supportive and sending their love and well wishes... My family are kind of delighted that I'm getting a bit of recognition. It's just really nice to be recognised for the work you've put in, you know, that's what's really nice about it," she said.

Caroline Kay's Notes is available now. Check her out on Snapchat @carolinekay117 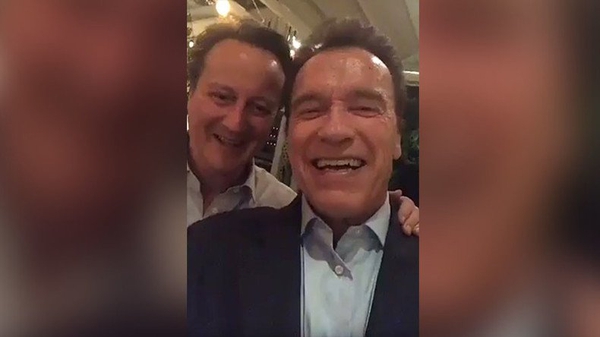 Davd Cameron vows "I'll be back!" in Arnie Snapchat video