More than 1000 young technology innovators worldwide are busy coding and creating for Coolest Projects International 2019, the world’s leading technology fair for young people, which takes place in the RDS, Dublin on Bank Holiday Sunday, May 5th!

And a few of the young people entering took time out of their busy schedules to showcase their works in progress at the CHQ buildings in Dublin.

From 3D fighting games, remote controlled tanks to an app that helps the non-verbal communicate and a website showing you the nearest public loo, these are just a sample of the amazing inventions kids from all over Ireland and the world are preparing for this year's Coolest Projects International event.

Coolest Projects takes place in Ireland every year, organised by the team behind Coder Dojo, the global, volunteer-led movement of extra-curricular coding clubs for young people that started in Ireland.

It developed from the Irish-born Coder Dojo movement in Dublin in 2012. Since then, it has expanded to become an international series of showcases open to young creators aged up to 18 from within and beyond the Coder Dojo movement. Coolest Projects International is the keystone event of the series, inviting children from all over the world to take part.

Young techies everywhere are getting ready to show off their impressive coding skills on a global stage. Nearly 10,000 people walked the stalls of the RDS exploring the inventions of young coders last year, and this year's event promises to be just as busy.

The event will take place on Bank Holiday Sunday 5 May in the RDS Main Hall - members of the public can get free tickets at coolestprojects.org. "Anyone and everyone is welcome to attend," says Rosa Langhammer, coordinator of Coolest Projects and General Manager at the Coder Dojo Foundation.

"The aim of the event is to celebrate the creativity of young people, as well as show them the power of technology to change the world."

The 5th year student said "I started coding in school when I accidently came across Coolest Projects with my teacher who taught me lots about Scratch (the visual programming language).

"I spend one hour and a half practicing coding every day - I fix bugs and glitches or else just improve and make changes."

Estela is now working on a 3D animated video game where multiple users can fight each other to win and she plans to enter it in the new 3D animation category of Coolest Projects 2019.

"I thought it would be amazing to do a video game because video games can be more than educational, they can teach you so much but they can also be fun and entertaining."

"The goal is to become the number one fighter. I think other teenage girls should begin coding and I wanted my game to prove girls can be coders and fighters too."

9 year old Emily Carter Keogh has built an app to help her 15 year old brother, who is non-verbal, to communicate.

The 3rd class student said "My project is to help non-verbal people communicate. The reason I wanted to do it is because my brother sometimes finds it hard to communicate with speech."

"Maybe he can communicate better with my sister and mom once it’s complete - I think it’ll make him happy and make his life easier."

"I think technology can be good for helping people and apps like mine can be useful.

Emily is excited to get the chance to present her invention this at Coolest Projects 2019 this May.

"This year is my first Coolest Projects and I’m really excited. I think it will be really fun and I want to share my project. I hope other people will enjoy it and I’m excited to see other people’s projects as well."

Emily’s parents Gary and Aisling Carter Keogh say they have seen her daughter become more confident since she started coding at her local CoderDojo.

"She loves it. She’s quite shy but she likes people being interested in what she’s interested in - it’s a great confidence booster. It brings her out of her shell and it’s a great chance to try public speaking, to mix and meet different people, all ages genders and nationalities."

She’s been coding for 18 months and she enjoys it. She loves to see the results of what she’s doing and to actually say ‘she’s made this’.

Harold Perez, whose son 12 year old Lucas and 9 year old Oriana presented their projects last year said "It’s a fun day. They get to share their projects and see what other people are doing."

"As much as everything is about coding, it’s also about communication.

"I tell the kids they’re not going to get their startups up and running unless they sell their idea and are able to talk and present and get other people enthused."

It’s not your typical competition, rather it’s about sharing. I notice the kids are as much focused on what everyone else is doing as what they’ve done. It’s all about fun and sharing. That’s what makes Coolest Projects cool!"

This year’s Coolest Projects International event will take place in the RDS Main Hall, Dublin, Ireland on 5 May 2019 - find out more here. 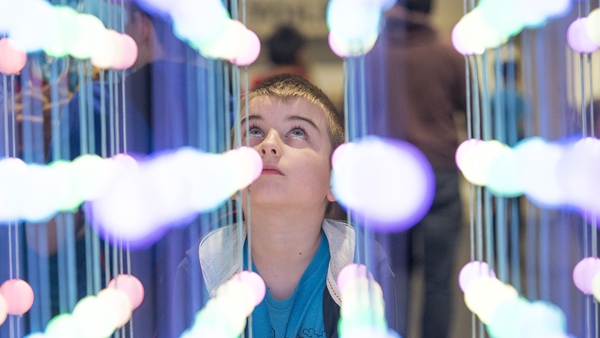 The kids are coding: getting ready for Coolest Projects 2019 Tech