The acclaimed radio series Through the Canvas was first broadcast on RTÉ lyric fm during the summer of 2018;  every week, critic Cristín Leach talks us through a different artwork, in the company of co-presenter Diarmuid McIntyre, with illuminating results.

Listen below as Cristín and Diarmuid McIntyre accept the invitation of Norah McGuinness's 1962 still life painting Garden Green for Through The Canvas, and read Cristín 's insights into the work.

Listen: Through The Canvas on Garden Green (1962) by Norah McGuinness

Norah McGuinness (1901-1980) is one of the many pioneering women in Irish art history whose work deserves more attention. This painting first grabbed me when it was shown as part of the Irish Museum of Modern Art's Analysing Cubism show in 2013. At that time and in that company - alongside works by her peers Mary Swanzy, Mainie Jellett, Evie Hone, May Guinness and more - I recognised Garden Green, painted in 1962, as a McGuinness masterpiece.

I have loved it ever since, and always make time to stand in front of it when it is on display at The Hugh Lane gallery. Talking about this painting with producer Diarmuid McIntyre at the start of this radio series, in my own home, with the green fields outside, shifted my perspective again. The more I looked at McGuinness’s work, the more I saw that this invitation to escape, to walk down a path or through a gate, is a repeated motif in her paintings, and an important one. We concluded the original twelve-part series of Through the Canvas with a McGuinness painting too, The Startled Bird - listen to that episode here. It seemed apt to start and end our journey with paintings by an artist whose work is a constant invitation to explore the world, to escape, and to return home, having learnt something new along the way.

If you can't get to Dublin and would like to see some more of McGuinness’s paintings, the Crawford Gallery in Cork also has an impressive selection, including A Quiet Place, River to the Sea and The Melon, among others, in its collection.

Through the Canvas, RTÉ lyric fm, 27th Dec until 4th Jan at 11am daily - revisit the previous episodes in the series here. 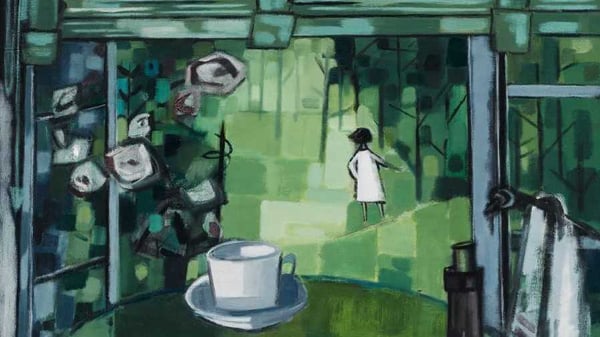 Through The Canvas - bringing art into the real world visual arts