Every week, critic Cristin Leach talks us through a different artwork for Through The Canvas on RTÉ lyric fm - this week, she's taking a closer look at Shannon Series Painting (1980) by Camille Souter, from the Irish Museum of Modern Art Collection.

The photographer Kim Haughton took a remarkable photograph of the painter Camille Souter (b. 1929) in 2015 as part of her Portrait of a Century project. Portrait of a Century was an ambitious group portrait endeavour, sparked by Haughton’s realisation that she had taken one of the last photographs of the poet Seamus Heaney. That image ignited thoughts of the transience of human life, legacy and what we do with the time we have. In tandem with the Easter Rising centenary commemoration, Haughton embarked on a plan to photograph one Irish person born in each year of the century from 1916 to 2016. Souter is the face of 1929. The image shows the English-born Betty Holmes, nicknamed Camille by her first husband Gordon Souter after Alexandre Dumas’ heroine in the novel La Dame aux Camelias, standing solid, weathered and windswept on a scraggy, rocky seashore, with the waves crashing behind her on a dull, grey day.

Souter grew up in Ireland and now lives and works in a studio on Achill Island. She is a remarkable painter of seemingly innocuous, generally people-less scenes pulsating with meaning. In Haughton's portrait she is wearing black tights, a floral dress, oversized navy jumper and a raincoat; her signature beret on her head. Around her neck, two heavy metal amulets hang from leather cords: a fish, and an airplane. Souter was 50 when she set out to learn to fly, while on residency at an airport. This week's painting is one she made at Shannon in 1980. A strangely empty, yet dynamic image, full of poised potential held in momentary check. The image of a plane crossing the tarmac just in front of us is an invitation to think about the possibility of flight.

Listen to Through The Canvas on lyric fm, on Tuesdays at 11.30am (as part of Niall Carroll's Classical Daytime) - find out more about the show here. 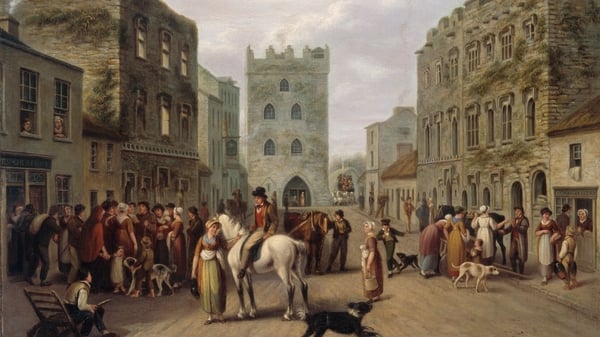 Through The Canvas: Cristin Leach on a romantic view of Ireland visual arts