Something is happening in politics that feels quite important. The latest example of this feature was last month when the Social Democratic Party surged at the very end of a four-year cycle to win the German general election. For decades, political science viewed campaigns as 'full of sound and fury, signifying nothing' and yet we are observing support for political parties changing rapidly during political campaign periods with much greater frequency.

This is not the only example of a dramatic change in fortunes for a political party in recent years. When Theresa May called a general election in the UK in 2017, she enjoyed an 18% lead over Jeremy Corbyn's Labour Party which narrowed to 2% in a matter of days.

Closer to home, the rise in support for Sinn Féin at the 2020 general election took many, including the leaders of the party, by surprise. In each case, the parties seemed destined for a poor election when their fortunes dramatically reversed. So, what is happening and what does it mean for party politics?

The rise of Sinn Féin is certainly worth discussion as it surprised the party in 2020 so much that they did not run a sufficient number of candidates to capitalise on their popularity. It is difficult to attribute their surge to a specific event. Neither the RIC commemoration debacle (too early) nor the narrative around the two-way leadership debate (too late) fit the timing of the increase in support for the party. Indeed, when asked whether people noticed any campaign event at the time, very few registered anything that could be attributed to the party.

There is also little evidence of a bandwagon effect, where a party's increased support feeds improving fortunes. Indeed, an Ireland Thinks' poll in January 2020 showed that in the same poll where support for Sinn Féin surged, most respondents believed that it was Fianna Fáil who had the strongest start to the campaign.

Some might argue that Sinn Féin's extensive campaign promises might have helped the party. However, the party’s support increased before its manifesto was published and did not seem to increase significantly thereafter. Indeed, this is something that experimental evidence also suggests damages party support. Thus, there is little to suggest that Sinn Féin capitalised on anything other than the triggering of the election itself.

However, a rise in support for an opposition party is actually contrary to historical patterns. As we can see in the next graphic, it is support for government parties that tends to improve during election campaigns. Indeed, this very fact is one reason why these surges in support are particularly fascinating. 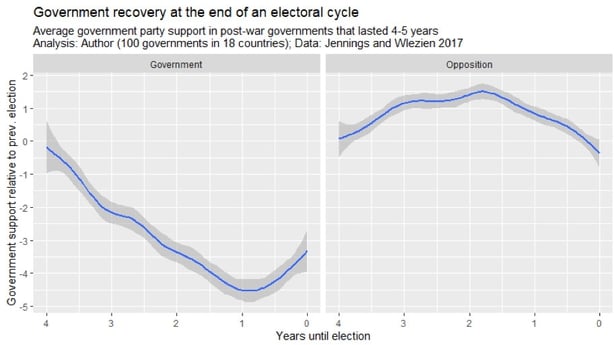 This is also equivalent to the much more dramatic 'rally-round-the-flag' effect where a reduction in criticism of government policy during a major international crisis can yield enormous increases in support for government parties. Another argument is that it is difficult for polling companies to capture true sentiment outside of an election campaign as it is only at the time of an election campaign that those that might switch between parties will have given their decision significant thought. Either way, what is undeniable is that these surges in support reflect increasing electoral volatility.

The next graphic shows the steady increase in electoral volatility since the 1980s. Firstly, the Pedersen Index measures volatility by adding up the observable changes in preferences between political parties (and dividing by two so as not to double-count). The second chart is perhaps more intuitive. It shows that a political party might have expected a change in support (up or down) from one election to the next of an average of 4 per cent before the year 2000. However, the equivalent figure today is closer to nine percent.

It is clear that elections are becoming volatile and that volatility can sometimes reveal itself very late in the election cycle. The implications of this are quite important. If we know now that support for political parties today bears little resemblance to their support when the results of the next election roll in, then arguably politicians can afford to pay less attention to public opinion. This lack of certainty perhaps frees political leaders to become more secure in their position. This has the obvious flip-side for the public, perhaps that more fickle public opinion will perhaps hold less sway with political leaders.

So even if, for example the Katherine Zappone scandal dented support for the government, or specific ministers it seems likely it this will only have a temporal effect. Leo Varadkar's approval rating for example has yo-yo'd between very high levels of popularity during the Brexit negotiations to a dip during the 2020 general election, followed by an even more impressive approval rating at the start of the pandemic, to another low today.

However, before government supporters and figures alike breathe a collective sigh of relief, there are also latent factors that might only become apparent at the next election. There are indications that the next general election will be bad for at least one of the governing parties.

Firstly, the collective vote share of Fianna Fáil plus Fine Gael has declined in most elections since the 1980s reflecting a greater capacity for left wing political parties. Secondly, governments typically decline in support by a couple of percentage points on average. Finally government parties in the post-war period have never totalled over 48%, with a median of 44% of the vote. This would suggest that at least one of Fine Gael, Fianna Fáil and the Greens with a total vote share of 50% at the last general election will decline in support at the next general election. 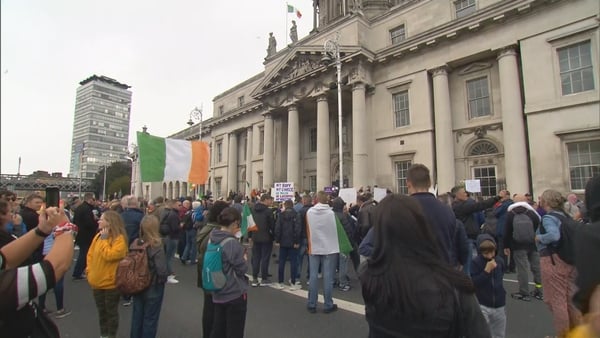 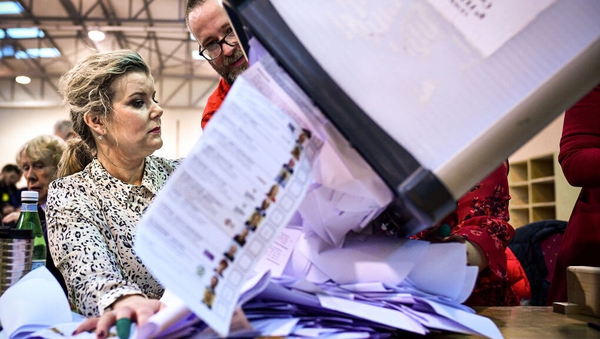 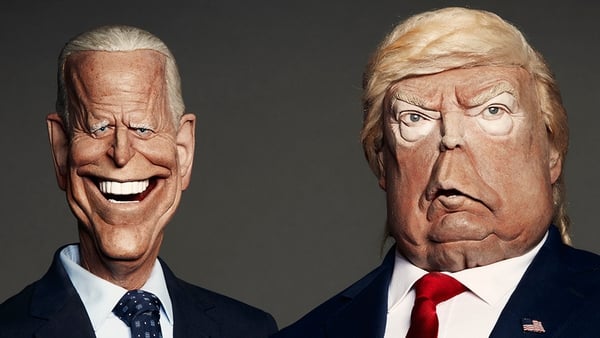