Christmas Eve 2017 was very special. That was the day when President Michael D Higgins signed the Irish Sign Language Act, recognising Irish Sign Language as the third language of Ireland. The act was dedicated to the memory of two elderly deaf brothers – Daniel and William McCarthy – who were found dead in their Dublin home in 2016, just weeks after the Oireachtas Joint Committee on Justice and Equality reported on the extreme marginalisation of Irish deaf people.

The Act brought the promise of access to public services, and participation in Irish life through recognition of Irish Sign Language and a range of measures related to the provision of sign language interpretation. The promise of access is one that we have seen played out on our screens across 2020: sign language interpreters have been a daily presence at Covid-19 briefings and have appeared on The Late Late Toy Show. The question is: what are they doing?

Before we get to the interpreters, we should take a moment to consider sign languages themselves. People often assume that sign languages are representations of spoken languages on the hands, or that they have been invented by someone to 'help' deaf people. The truth is that sign languages, like all natural languages, have evolved naturally over time. We know that there have been signers in Ireland for hundreds of years, and we can trace their presence through such official state records as courts, workhouses, census documents, and, since the turn of the 19th century, school records.

Different languages package information differently. While spoken languages are spaghetti-like, we might think of sign languages as being like lasagne. Instead of a stream of words following each other, sign languages layer information through use of the hands, the body and eyes, head, and mouth. In sign languages, events are typically presented from the point of view of the signer.

From RTÉ Radio 1's Liveline, as sign language is given official language status, Catherine White speaks of life with her deaf parents (see ISL translation and transcription below)

For example, in the lefthand photo, the signer is telling us how he was (mistakenly) prepped for heart surgery. He has partitioned off part of his body (the hands) to represent the hands of the healthcare worker who was preparing him for surgery while the rest of his body represents his own body. 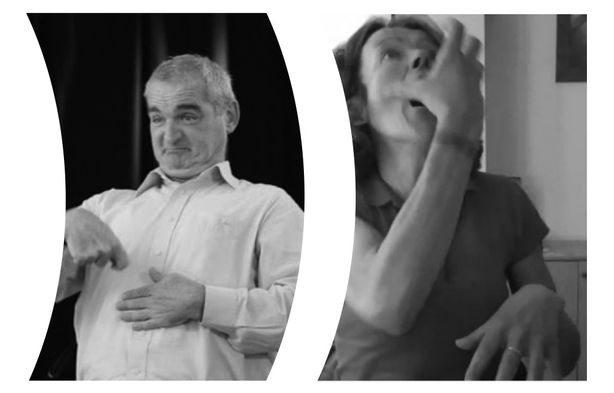 The interpreters on our screens each day have learned how to listen to a message and figure out the best ways of presenting that information in a language expressed in another modality in way that reflects the concept expressed by the speaker. They have to remember what they have just signed and map the unfolding discourse to the train of thought they are expressing in Irish Sign Language all the while continuously listening for the next piece of information. It is a highly complex and cognitively demanding task.

When interpreting for children, there is also a need to consider the language profile of the child watching. How much access to Irish Sign Language will they have had? What level of proficiency might they manage? The ways in which children sign differs from that of adult signers, just as children's use of spoken language differs from that of adult speakers. So the interpreters working on The Late Late Toy Show had these issues to consider on top of the regular challenges that all interpreters face.

As in most of Europe, interpreting in Ireland is not a 'protected’ profession and anyone can claim to be an interpreter. Fortunately, one of the things that the new Act has done is require public services to hire people who are members of the Register of ISL Interpreters (RISLI).

Despite the many challenges 2020 has brought, the year will be remembered as a year when sign languages were visible and when the rights promised by the Act became seen. These are things that we must bring forward into our "new normal" because how things were before are no longer good enough.

J: There's a fascinating photograph in front of me.  Catherine White, Good afternoon.

J: And you sent me in this photograph.

J: And I’ve counted…. so far I’ve counted forty people and then I missed the man on his tummy on the floor with a bottle of fant..

C: With a bottle on his head

C:  The…. the photo… my mother, my father, my aunt, my uncle, my cousins and I think it was one or two brothers

J: Everyone in that photograph

J: Bar six of you, are Deaf

J: Wow and people didn’t know….. and that’s why your contact jumped out at us this morning.  You say yesterday marked a historical moment for the three generations of my family.  As a daughter of two Deaf children (?), my whole life was Deaf.  Deaf people are now first class citizens.  You were crying on the floor yesterday watching Minister Anne Rabbite announce the formal commencement of the Irish Sign Language Act 2017 which is when it began.  Why were you crying Catherine?

C: Because it’s three generations of my family that have been using Sign Language.

C: And they are now officially recognised as having a language in their own right.

J: And what does that mean?

C: Well in the past, Deaf people were just seen as 'ah God love ‘em’.  They can only use a bit of Signing but they weren’t given equal value and I saw that growing up.  But it was a paradox because my family were fully functioning. They were parents like any other parents were.  They’d be giving out to you.  They’d be laughing with you.  They’d be getting out of bed and getting you to mass and all of that.  And sending you to school and making sure you were clean and making sure we were fed and then you’d go out into the outside world and the perception was very different of them.  So when you are growing up with that you can’t quite understand like but why do people say that? Why do they see them that way.  And with the Act yesterday…. now the act was made official the 23rd, 24th December in 2017 when it was signed by President Higgins but it had taken three years to be implemented so yesterday, so Annee Rabbitte yesterday didn’t just speak to the implementation of it, she Signed it.

C: It means there is hope.

J: But what does it mean practically?

C: Practically, it means that public bodies now have a duty alongside Irish to provide information and services through Irish Sign Language, so a Deaf person can go to any public department now and say that I would like my information in Sign Language and it will be provided.  That’s a commitment that has been made.

J: And that’s the reason…. People often get confused when they are looking at the HSE press conferences, there will be a Signer. They’re signing in ISL, aren’t they?

J: And that’s why there are two Signers at the Northern press conferences.

J: Because they are doing two different Sign Languages.

C: And that shows the beauty of languages, doesn’t it?  And the culture.. And it’s showing who you are, where you’re from and what you do.  And that is a very significant…. I mean, worldwide, you don’t see that.  And here we are, in Ireland, with the counties that we’ve got with that kind of richness and it’s to be celebrated.

J: Yeah.  And Catherine, what was it like for you growing up in family…. I mean, you’ve already prefaced it by saying it was fairly normal but you used a phrase earlier on about your parents that they were almost dismissed.  Were they isolated…. if you were Deaf?

C: Isolated in mainstream society, but not within the Deaf Community.

C: Within the Deaf Community, it’s very close knit.  They all were educated…. In my parent’s time and in my cousin’s time in Dublin in Cabra.

C: All the girls went to St. Mary’s and the boys went to St. Joseph’s.  So there was a very strong, extensive network within the Deaf Community and when they went back to their own respective counties, they kept that contact and I know that because we would be piled into two cars, as many weekends as possible, and travel to all of these Deaf events and Deaf Clubs and parties.  It was just pure.. pure Deaf but a very strong network.

J: And are your parents still alive?

J: And they would have, I’m sure celebrated yesterday.

J: Oh Catherine.  Are Deaf people….given the topic of the show today…. propelled by our listeners I hasten to add is discrimination on the basis of social class…. were Deaf…. people who are Deaf…. were they.. are they discriminated against?

J: I know yesterday was a great step.

J: Ok Catherine.  An incredible story.  And congratulations to everyone who campaigned for that over the years.

J. It’s been a long time, a long time coming but it’s a good, good development.

J: Catherine, thanks indeed and kind regards to you and your extended… who was the man on the floor with the bottle on his head?  Who was he?

C: You see that was the thing.  They were great characters.  They were very funny.  And it’s such a pity that there were no video records just to show the humour and the depth of their personalities and their characters and all of that.  But that picture there is my reminder all the time.  You know.

(Thanks to Catherine Walsh for providing this)