Analysis: Do the benefits of investing in energy efficient measures for your house out-weigh the costs?

For decades, the public have been warned about the impending threat of climate change to communities and ecosystems home and abroad. I, too, have lowered the tone of many a social occasion with animated and flaying descriptions of a bleak business-as-usual future. My rants probably stem from my own suppressed carbon guilt (I flew about 30,000 kilometres last year). The latest advice for reducing your carbon footprint goes straight to the heart of communities: have fewer children.

While future climate damages need to be part of the debate, most of us understand the threats at this stage. A 2017 European Commission survey showed that 68% of Irish citizens see climate change as a "very serious" problem (a bit below the EU average of 74%). While this is lower than the scientific consensus, most of us seem to get it. However, the many benefits of low-carbon living, both privately and publicly, haven’t received equivalent levels of attention.

Economists and policy-makers often use a cost-benefit analysis to decide whether a particular course of action should be pursued: if the benefits outweigh the costs, take the plunge. But a household’s decision to invest in energy efficiency is multidimensional and complicated, and includes many household-specific and hard-to-quantify components with long-term implications. Each individual will have to weigh-up their own pros and cons. No household is identical in consumption, attitudes and finance, and the benefits may not outweigh the costs for every household.

While the costs of, say, installing better attic insulation are clear(ish) after asking around (it will involve money, and installation could be disruptive to household routines), the benefits really depend on who you are and how you live. While an engineer can tell you how much your energy bills will decline by and an economist can predict how much your property value will increase, the benefits of living in a warmer, dryer and healthier (and probably happier) building depend on the individual. Furthermore, given that carbon reductions have an altruistic component (helping the next generation), many will also feel a private warm-glow for playing their part.

From RTÉ One's Six One News, a report on a bungalow in Co Mayo which has been certified as Europe's most energy efficient home

The monetary and carbon savings of home energy efficiency improvements are a bit more straightforward. The table below shows the energy bills and carbon emission for a hypothetical household living in a four bed, 150 sq metre property and driving one car 16,000 kilometres per year. Assume the household already has an efficient set of appliances and ignore the carbon associated with air travel (which can be large).

We’ll also be optimistic about any behavioural changes which can lessen the expected savings of efficiency improvements, known as "rebound effects" (when you use more energy than engineers expect as it’s now "cheaper" for you to warm your house). These calculations draw on various sources including house and car forecasts from the SEAI (see table notes for all details). 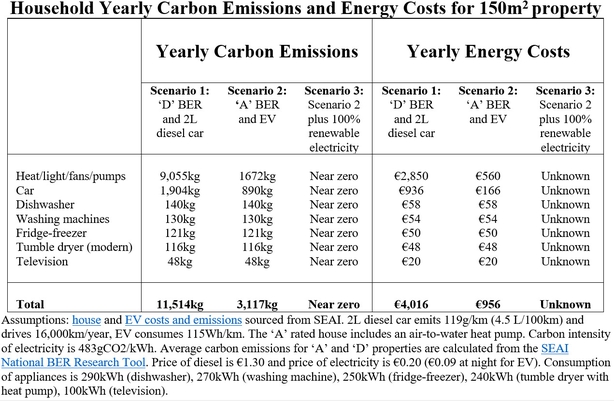 Under Scenario 1 (the status quo), the property has a D BER rating and the owner drives an eight-year-old two-litre diesel (about the average age in Ireland). In Scenario 2, the household upgrades to an A BER (via better insulation plus an air-to-water heat pump) and buys an electric vehicle (EV) which will be charged on the cheaper night tariff. Scenario 3 is the same as Scenario 2, except we assume that all Irish electricity is generated from renewables such as wind, solar, tidal etc.

In the status quo (Scenario 1), the household emits 11,514kg of carbon per year. Due to space and water heating, the house contributes by far the largest share (79% of the total carbon footprint). The remainder is associated with the car (17%) and appliances (just 5%).

The A BER upgrade and the switch to EV in Scenario 2 reduces total carbon by over two-thirds (73%). While car emissions are down 53%, the house now emits 82% less. Finally, if Ireland’s generation were similar to Norway’s (Scenario 3 – almost 100% renewables), this electrified household would now have near zero carbon emissions.

Energy bills drop from about €4,000 per year in Scenario 1 to less than €1,000 in Scenario 2. While it is possible that the 100% renewable situation (Scenario 3) would see a decline in electricity prices due to free "fuel", the large infrastructural investment required to achieve this may cancel out any savings. The net effect is uncertain.

Is an almost zero-carbon Ireland of 2050 actually achievable?

So is energy efficiency a good investment? A clear prerequisite is the availability of finance, but the investment is more likely to be viable when house price appreciation is considered and whether or not the hard-to-quantify components (such as improved occupant health) come into play for the investor. Viability will also depend on factors which influence the initial investment amount (such as grants) and the savings on future energy bills relative to your existing technology (such as carbon taxes).

If most households and firms insulate and electrify, there are a number of national economic and societal benefits of Scenario 3. Firstly, fuel imports from abroad would decline significantly. In 2017, we imported €4.8 billion euro in coal, petrol, diesel, gas and electricity. For context, €4.8 billion would be enough to install about 1,150 large 3-megawatt wind turbines (€1.4 million per megawatt), which is equivalent to our current installed capacity.

Secondly, large-scale retrofitting in disadvantaged areas (already underway) will lift many families out of fuel poverty. Thirdly, the EPA estimate that there are 1,500 premature deaths in Ireland due to air pollution. This figure would decline, as would the numbers experiencing other respiratory conditions.

READ: are electric vehicles the answer to issues around air pollution?

Is an almost zero-carbon Ireland of 2050 actually achievable? Our national grid would require significant investment to accommodate the increased variability of renewable supply (which will be at the mercy of the weather). However, the possibility of a million or so large batteries spread throughout the country in the form of EVs could help to balance supply and demand (this trend is known as Vehicle-to-Grid or V2G). The production of hydrogen on windy days for generation on less-so-windy days may also play a role. Couple this with lower-carbon food habits and a few less flights and, well, we’re well on our way.