Opinion: here's how a scientist would use Christmas to talk about the challenges we face with climate change and air quality

Scientists find it difficult to communicate science to the public, though there are notable exceptions like David Attenborough and Jacob Bronowski. Part of the problem is the unemotional and rational state required to make authentic discoveries about the natural world - and humour is definitely not used when publishing scientific observations and facts in research journals. But let's see if we can use a light-hearted Christmas theme to explain the challenges we face with climate change and air quality.

Turkey on your table…ammonia in the air

Ever since Ebenezer Scrooge woke up from his ghostly nightmare and bought his poorly-treated clerk, Bob Cratchit, a turkey, the bird has been a centrepiece of our Christmas dinner. To get there though requires a lot of plumping up with feed...and inescapable outcomes on the ground at the farm.

Those "outcomes" release ammonia gas, which you may know better as the main ingredient of smelling salts, the saviour of many a Jane Austen character after a bit too much eggnog. But the release of ammonia into the atmosphere harms our air quality by its reaction with sulphur compounds emitted by burning coal and from the fuel used in ships. The result is the formation of tiny particles that we can breathe in and can go on to kill us.

From RTÉ Radio One's Drivetime, Stephen Treacy from the Environmental Protection Agency on the rising levels of pollutants like ammonia and nitrogen oxides in the air

The global effect is not small. In fact, small particles are estimated to cause over three million deaths every year with more than half of the particles found in the eastern and central United States coming from farming. (We do not know the figures for Ireland). However, we do know that about 20 percent of the contribution from agriculture is due to poultry droppings.

By all means, tuck into your turkey but do ask yourself a question: are we really the ones who are voting for Christmas?

Getting a lump of coal in your Christmas stocking traditionally means that Santa Claus thinks you’ve been naughty rather than nice. Ironically, if you’ve been burning coal, peat or wood in your living room fire, then you have been very naughty indeed.

Domestic solid fuel burning is one of the largest sources of air pollution in Ireland. Especially in small towns like Enniscorthy as the CRACLab SAPPHIRE project for the EPA showed.

Your fire is not only harmful to you in your own house, but also to your neighbours because 90 percent of the smoke and chemical fumes end up next door. So, if you want to give Number 11 some toxic chemicals like benzene and other carcinogens for Christmas, get the matches out.

From RTÉ Archives, a RTÉ News report by Cathy Halloran from 1988 on Dublin Corporation's plan to ban the burning of smokey solid fuels in Ballyfermot to improve the air quality for residents

Burning coal, wood and peat is especially harmful to asthmatics, the young, the old, people with existing heart conditions and the pregnant. That’s quite a Christmas list.

And just think what it does to poor old Santa when he tries to deliver your fantastic presents down the chimney. We can only hope that he has good medical insurance back in the North Pole.

To keep Santa (and us) healthy, put some solar panels on your roof, insulate your homes better and install a heat pump. Clean energy means clean air.

Santa Claus is coming to town - but how does he get here?

In a few days’ time, Santa Claus will be starting his mammoth 365,174 km journey around the Earth to deliver gifts to all of us who have been good in 2018. He starts and ends at the North Pole making countless drop-offs in between. Now we all think we know how Santa gets to all those chimneys, but do we really?

It starts with the elves loading up the sled with goodies. Fortunately, they do not need to fill it up with petrol or diesel. If that was how Santa’s journey was powered, it would release between 45,000 to 50,000 kg of carbon dioxide (CO2) gas into the air trapping heat over the next 100 years. That is not good for our climate because a warmer planet would lead to floods, hurricanes, droughts and sea-level rises.

The sled would also shed enormous but unquantifiable amounts of toxic nitrogen dioxide (NO2). Also, the small particulate matter we call PM2.5 (made up of carcinogens, acids and heavy metals) that gets into our lungs, our arteries and our brains.

Santa, of course, knows that using fossil fuels for power would mean that in the next 50 years or so the place where he lives might be underwater and his annual visit to all of us would stop. Can you imagine the tears and tantrums if that were to happen?

From the Documentary On One series, The Reindeer Santa Left Behind tells the story of what happened when one of Santa's reindeers got badly injured in Ireland

Instead, Santa invented a Green Technology called Antlaerodynamics®. Rather than filling up with petrol or diesel, the elves saddle up Rudolph, Donner, Blitzen and the rest of the reindeer gang to pull the sled without bad climate change and air pollution effects. If you want to know how everything gets off the ground, I am only authorised to say that it depends upon wind flow across the antlers to form a vortex of the type that makes the spout of a tornado.

And that’s how Santa gets here - and why Santa is seriously thinking of going back to his green outfit rather than keeping the current red one. 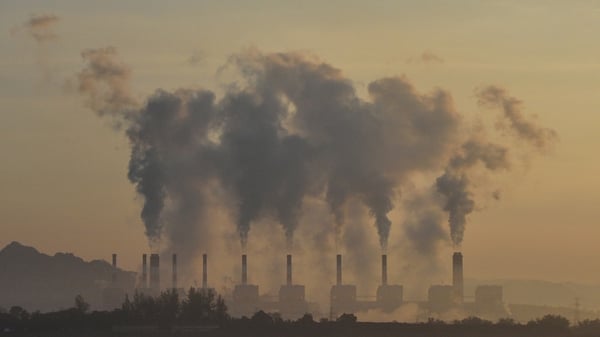